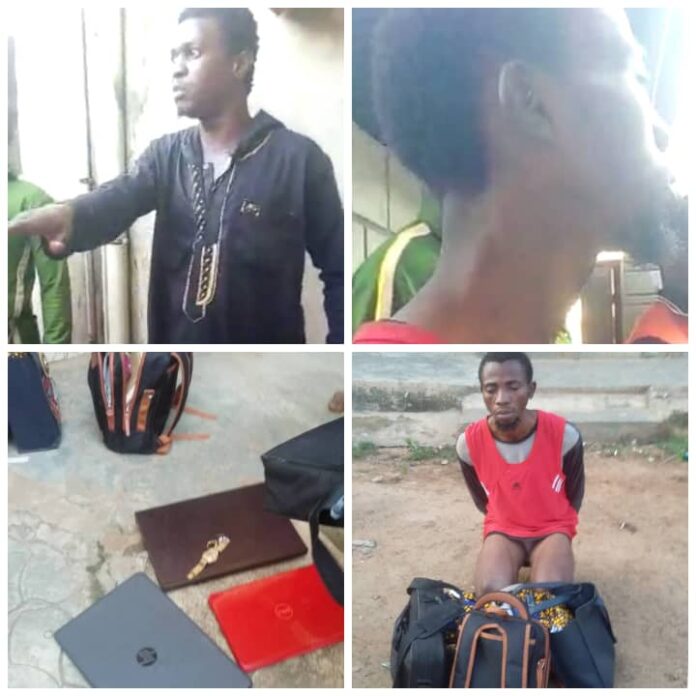 According to a statement released by the State Commander of the Corps, Commander (Dr) Soji Ganzallo through the office of the Director of Information and Public Relations of the Corps, Assistant Commander Moruf Yusuf said that ‘the victim put a call through to Adiyan – Alusa Onibudo Division of the Corps on Tuesday, September 20, 2022 at about 1600hrs reporting how some robbers robbed him of his belongings and carted away some items at Mercy Avenue, Onibudo on Saturday, September, 17, 2022’.

Ganzallo’s statement further revealed that his Officers and Men in Isheri/ Akute -Ajuwon Area Command were put on their toes to make sure the culprits were brought to book.

He further revealed that ‘after a covert security activities of the Corps, the operation team of Adiyan-Alausa Onibudo Division of the Corps arrested one Mr Opeoluwa Alade Sunday, 23 years of age who confessed to the crime and later led the team to Anthony Garden Hotel, Doland Bus Stop, close to Agege /Akute Motorpark, a place of hibernation of the culprits as confessed.

Two (2) other suspects in connection with the robbery case were also apprehended, they are Stanley, and Hammed Isiaka also known as Jack Omo Baala.

Meanwhile the Corps is working to get the rest culprits at large as they confessed they do keep their guns with them.

The culprits during preliminary investigation confessed that on the 19th. of September, a member of their team called ‘Osun’ allegedly killed a boy at Abe-igi, a matter presently with the Nigeria Police.

The Three (3) robbery suspects and the exhibit found with them – 3 Laptops, 2 wedding rings, 1 wrist watch and 32 yards of Ankara have been transfered to the Nigeria Police, Ajuwon Police Divisional Headquarter for further investigation and likely prosecution.