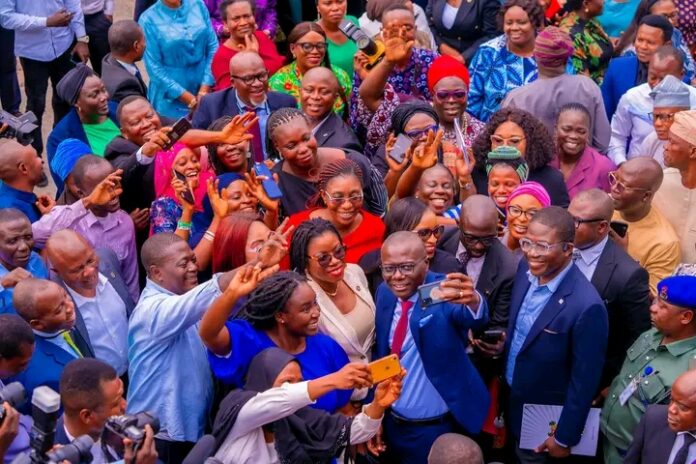 Lagos State Governor, Babajide Sanwo-Olu has announced 25 percent salary increment for employees in the core establishment agencies within the state.

The move according to the Governor is said to cushion the effects of inflation, high prices of commodities and rising cost of living being experienced across the globe.

Sanwo-Olu personally broke the news to the civil servants, who gathered on Tuesday to receive when he paid a surprise visit to the Secretariat in Alausa – the seat of the Government. His cabinet members joined the reception, which was led by Head of Service, Mr. Hakeem Muri-Okunola.

Sanwo-Olu has also directed the Head of Service, Ministry of Establishment, Training and Pensions and the State Treasury Office (STO) to work out the modalities for upward review and statutory approvals, after which the implementation of the new pay would kick off.

The announcement elicited spontaneous jubilation from workers, as the news went round the Government Secretariat. The enthusiastic staff said the new salaries would boost productivity and scale up service delivery to residents.

Sanwo-Olu said the workers deserved encouraging welfare and benefits, given their unprecedented support and commitment to the core mandates of the State Government. The Governor added that the gesture would further motivate the State’s workforce and enhance its services to the people.

He said: “I have looked around, I know there is pressure and high level of inflation in the country. There is high cost of living everywhere. Last month at the cabinet meeting, I instructed the Office of Head of Service and Ministry of Establishment, Training and Pensions to start work on how we will increase the salaries of the entire workforce.

“I just don’t want to talk about it because we are Lagos; we reflect this decision in the lives of our people. I know the pressure of inflation is on you; we will not wait for the Federal Government before we take this decision. This is Lagos. We are going to review the salaries and ensure we take care of our public servants.

“When we do the pay rise, not only will we expect more from you, our citizens must also see the benefits of this important decision in the service delivery. We are a Government that is proactive, we don’t want the staff unions to hold us to ransom. We are responding to the yearnings of our people; I know you have not asked for it, but I am happy to tell you that a pay increase is on the way.”

Sanwo-Olu also announced the plan to raise the fleet of staff buses deployed to carry workers from their homes to work and back. At the inception of his administration, the Governor raised the fleet from 10 buses to 35.

The additional buses, he said, would be deployed on new routes to assist those not captured in existing routes.

The Governor also said the first fleet of 100 vehicles would be given to employees on the Director cadre in the public service, while also approving discounts for workers interested in acquiring apartments in the Government-owned mass housing schemes. This, he said, will be followed by development of staff housing stocks only for Government workers.

He said: “Lagos has been the best in terms of payment of pension benefits to our retired workers. Our Government is committed to clearing the entire backlog; we are already close to clearing the 2021 liabilities. We are committed to ensuring that all our workers get paid their pensions upon retirement from service and this is the legacy we want to leave behind.

“I am one of you and I am part of you. It is really a homecoming for me. The support and the encouragement I have received from all of you has been unprecedented. On behalf of Lagosians, I thank all of you for the great service you are rendering, which has made the Lagos public service the best in the country. It is only when the public service is energised and properly motivated that the citizens can feel the best of governance.”

Muri-Okunola, on behalf of the civil servants, hailed the Governor for prioritising the workers’ welfare and benefits.

The Head of Service said Sanwo-Olu had fulfilled more than 80 per cent of his promises to the State’s workers, stressing that the welfare package of the State Government was second to none.

He added that 3,000 workers in the public service had benefited from the Governor’s retroactive approval for capacity building for staff, while the culture of prompt payment of salaries had been sustained.

Muri-Okunola said: “The Governor has ensured that the officers implementing his administration’s THEMES Agenda have adequate work tools and enabling environment for the actualisation of the programmes. A motivated workforce is what Lagos State public service is under the leadership of Gov. Sanwo-Olu and we will continue to get motivated to do more for Lagosians.”

Sanwo-Olu took a long walk around the secretariat. The Governor inspected the newly installed Data Centre for the State’s smart city project at the Ministry of Science and Technology.