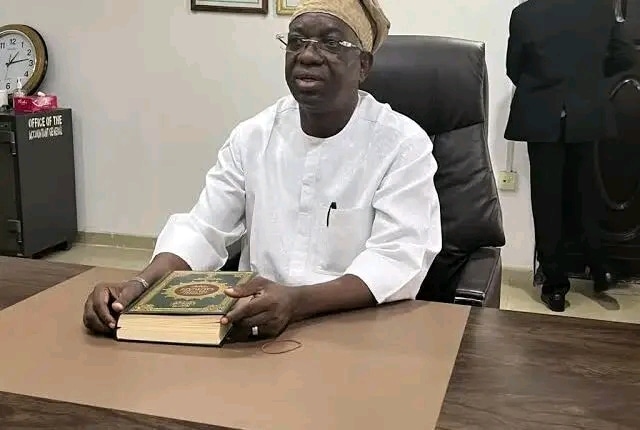 The Oyo State House of Assembly has adopted the recommendation of the seven-man panel investigating the Deputy Governor of the state Engr Rauf Olaniyan.

The panel approved the impeachment of Engr. Rauf Olaniyan having found culpable of all 5 allegations levelled against him by the 24 members of the state Assembly

The Speaker, Oyo State House of Assembly, Honourable Adebo Ogundoyin announced Olaniyan’s impeachment during today’s plenary sitting at the floor of the House after deliberation on the report of the 7-man panel of investigation.

According to the report of the panel as read on the floor of the House of the Majority leader, Honourable Sanjo Adedoyin, the deputy governor at different intervals during the course of the investigation failed to honour the invitation sent to him to appear before it thereby compelling the panel to make unnecessary adjournment.

Recall that Justice Ladiran Akintola of an Oyo State High Court, sitting in Ibadan last week dismissed the suit filed by the deputy governor of the state to stop the state House of Assembly from continuing with the impeachment process.

Delivering the judgment last week, July 14, the court held that the House of Assembly has not breached the provisions of the constitution on the removal of a governor or deputy governor.

According to the court, the lawmakers substantially complied with the provisions of Section 188 of the Constitution on the removal process.

The court said the lawmakers should continue with the removal process.

It would be recalled that the Oyo Deputy Governor, Olaniyan was alleged of financial impropriety, gross misconduct, abandonment of office, insubordination, and abuse of office, among others.

The House, therefore, in accordance with constitutional provisions for citizens’ right to a fair hearing forwarded a copy of the petition to the deputy governor for his response to the allegations levelled against him.