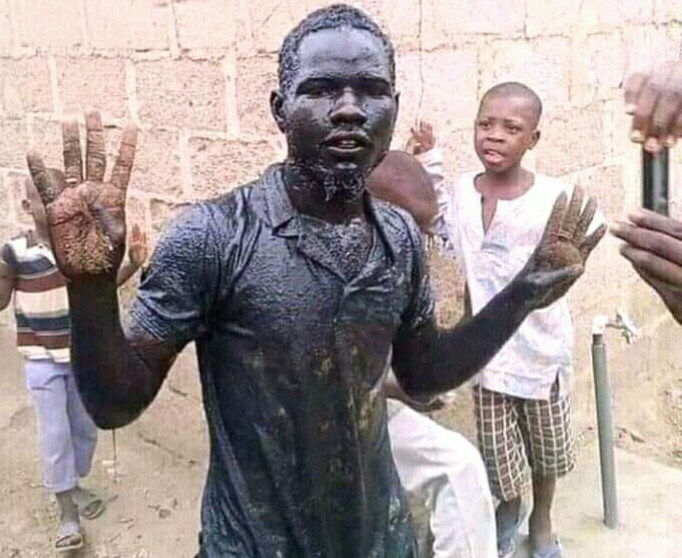 Celebration is part of man’s life, either for any reason, but be it positive, and celebrating with the celebrant is of course a necessity demand of the man race, everyone has a reason for celebrating, and whatever it can be, one needs to be careful when in the mood, as to avoid stories. The last presidential election has of course come and gone, and it has brought celebration to the camp of the winning team, and the people around the celebrant, while the other camp has resorted to fuming of faces.

However, some have turned the opportunity of celebration to another thing entirely, this isn’t just starting today or during this recent victory, we have heard of people trekking a long distance for the purpose of felicitating with the celebrant, in 2015, if we remember some people resorted to trekking a long distance for the purpose of celebrating with President Muhammadu Buhari, when he won after three times of contesting the elections, of course, as I said earlier, celebrating with a celebrant is a necessity in life of the man.

But what about doing it in a way that doesn’t correlate with the demand of human life, of course doing it to affect the person and now paying the drastic price of embarking on such unpalatable venture. Can this be regarded as a normal exercise of human life or a way to exhibit one’s stupidity because of whom the celebrant is? Will I go and stand on a moving motorcycle shouting because I am celebrating someone and at end of the day, I paid a brutal price for it? What sort of celebration is that? Does it augur well, even the person they are celebrating, does the person have concern for them or even recognize them, irrespective of who is involved (the celebrant).

Recently, it was reported of a 25 year old man who pledged to trek from Kebbi State to Abuja, because Buhari won the presidential election, despite with the level of kidnapping and killings in the Zamfara-Kebbi-Katsina & Kaduna axis, he has planned such journey and has packed in his bag only garri (cassava flakes), sugar, beans cake and cash of N1,500 as his basic needs to embark on them long trek to mark the Buhari’s victory.

Another who pledged to bathe in gutter and also drink it, though he has done it with the pictures of his ‘feat’ being circulated all over the social media, and there was also a report of his demise, and also it was also reported that the man is not dead, that he ‘faked’ it to get the president’s sympathy, but irrespective of that, the media are not doing well on this at all, as in on what grounds that newspaper platforms are promoting such stupidity instead of calling on the authorities to help stop this act of stupidity capable of consuming someone’s life. Why is the life of a common man means nothing to us!

What kind of politics are the northern citizens playing for God sake. We thought that the experience of the man that trekked from Lagos to Abuja and how he encountered criminals that almost took his life was enough a lesson to all this stupidity. Now we see why only 28 candidates, Kebbi, 50 and Taraba, 95 candidates respectively registered for Unity Schools entrance exam.

It would be recalled that in 2015, a man, Abubakar Duduwale, trekked from Yola in Adamawa State to Abuja to celebrate Buhari’s victory. Last year, the Health Minister, Prof. Isaac Adewole, visited the man at the Federal Medical Centre, Yola, after developing leg injury from the trekking.

I remember posting something about this on the social media, Facebook and a respondent said it is all about happiness, so it is happiness that will make you to engage in something that can claim your life, why can’t the celebrant also engage in it, or his family member? Is it that they don’t know how to celebrate or perhaps they know the evil in over celebrating. So why can’t we do likewise? Why must we keep thinking that we are making unreplicable feat for them or can it be possible that we are eyeing the Guinness World Book of Record?

To the security operatives, if you can stop protesters from discharging their civic duty from the risk involved, why can’t you also stop such people from risking their lives?

A question that needs to be answered…

Amosun Debunks Report of Disruption of Tradermoni in Ogun