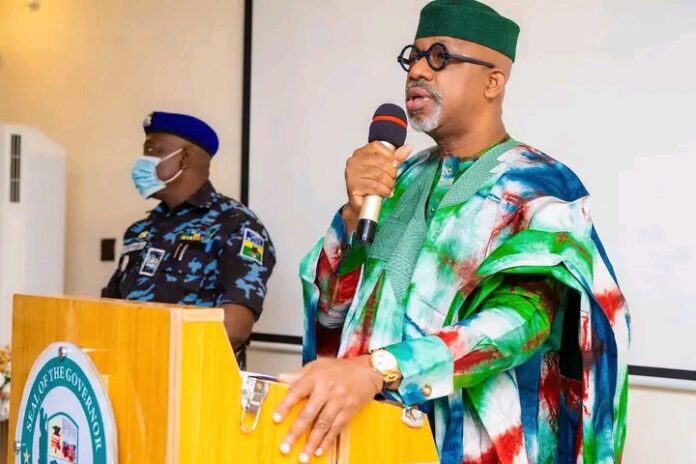 The award more or less coincided with the confirmation by the National Bureau of Statistics (NBS) that Ogun State, with its N100.9bn revenue profile in 2021, is one of the states with the highest internally generated revenue nationwide, coming only after Nigeria’s economic capital, Lagos; the FCT and Rivers State, a top oil-producing state.

If anything, the award is cheering news for all and sundry in Ogun State, recognising the governor’s resolve to bring positive development to the state, especially in the area of industrialization.

There is no state that can develop without industry and, contrary to the submissions of naysayers, a silent revolution has, in the last three and a half years, actually been ongoing on in the Gateway State.

In view of the fact that awards in this country often tend to be inspired largely by political patronage, it is legitimate to ask precisely what the governor did to win this exalted award, and that is actually the meat of this piece.

First, Prince Abiodun was able to create an enabling environment for business to thrive in the state. Unlike before when the state was plagued with political crisis leading to assassinations, not to talk of the hounding of the opposition by the government in power, there is now calm and tranquility in the state. And this is remarkable because Governor Abiodun’s immediate past predecessor has maligned his character, image and government to no end during rallies across the state, desperately seeking to drag him out into the arena of conflict. But the governor has not budged. Instead, he has addressed security crisis squarely, making the state safe for investment and for residency.

He has unfolded the state security outfit, Amotekun, and equipped the police extensively. And while there are still security concerns, security agencies in the state have the wherewithal to respond appropriately.

The Abiodun administration is noted for providing a competitive tax climate, realising that businesses must first make money before they can pay tax.

This was partly why he again won the good governance award at the Nigerian 62nd Independence Anniversary and Global Award Gala held in London, the United Kingdom and why, last month, he was adjudged by the leadership of the Nigeria Union of Journalists, Zone B, as the best governor in the South-West in the area of infrastructure development.

The award recognized the fact that in less than three years, his administration had been able to construct, reconstruct and rehabilitate over 600km of roads across the state. For instance, in Ogun East Senatorial District, it reconstructed the Ijebu-Ode-Epe road which has opened up the district to industrial development and in Ogun Central Senatorial, it built the 42km Sagamu Interchange-Abeokuta road while in Ogun West Senatorial, the 22km Atan-Agbara-Lusada road leading to the largest industrial estate in Nigeria has reached 80 per cent completion.

In June this year, the Federal Government recognized Governor Abiodun’s efforts to grow small businesses, honouring him with the award of Best State in Micro, Small and Medium Scale Enterprises Policy Support for the Year 2022 at the Presidential Villa. Prior to this, MSME Business Clinics had been organised in the state with more than 3,844 entrepreneurs in attendance.

The objective was to create an avenue for relevant enterprise development partners such as CAC, NAFDAC, SON, Financial Institutions, R&D Institutes and Entrepreneurship Development Institutions (EDIs) to provide information on services relevant to entrepreneurs.

The clinics also aimed at on-the-spot services in business name registration, product registration and standardization, access to finance and markets, and registration with the business membership organisations.

Actually, the administration established the Ogun State Enterprise Development Agency to provide support and capacity building to MSMEs, the bedrock of any economy.

Among other duties, the agency facilitates MSME development through business development services, access to market and access to capital. It also assists in getting available intervention funds from the Federal Government and monitors compliance with the requirements.

Besides, the OKoowo Dapo Scheme created 500 female entrepreneurs across the state, empowered 2,500 rural women through the provision of products worth N100m, and gave over 600 youth vocational training.

It reorganised the Ogun State Investment Promotion Agency to provide a one-stop-shop for investors on the natural and solid minerals resources of the state, business opportunities, and the facilitation required to invest in the state.

The facilitation includes land acquisition and ownership through the State Land Administration and Revenue Management Service (OLARMS), community relations, statutory documentation, and linkages with the suppliers, especially farmers through the Anchor Borrowers Scheme of the Central Bank. Over 40,000 agri-prenuers have been produced through the process.

Indeed, the Ogun State E-Procurement Portal (eprocurement.ogunstate.gov.ng) was created for contractors/vendors registration and is aimed at allowing more MSMEs to bid for government contracts, being provided with free registration for MSMEs with contracts below N20 million.

All along, the opposition kept attacking the governor, thinking that he would be distracted, but he has remained unruffled, focused on providing the dividends of democracy for the people of Ogun State. Of course, as we have already shown, it is not only the Federal Government that has acknowledged his transformation agenda: corporate organisations and Nigerians in the Diaspora have done so too.

In Ogun State, Nigerians can see a man with a clear-cut agenda and an action plan. The governor’s political adversaries had gone to Abuja to disparage him, saying he was not doing anything but when President Buhari came and saw some of the transformation going on in the state, he was shocked.

He said that if the cargo airport being built in Ilishan was completed this year, then he (Buhari) was coming back to commission it. And he actually will, because the massive Agro-allied Airport City meant to cater to both cargo and passenger traffic is scheduled to begin operations in December.

With the array of investors he has brought to the state, Prince Abiodun has surpassed expectations, doing in three and a half years what some governors have not done in eight years. And when his adversaries say that he has done nothing, tell them that the Olokola Free Trade Zone abandoned for many years is now a reality in Ogun State. It’s really such a beautiful moment in the Gateway State…

Bakare sent this piece through seyibakare@naver.com