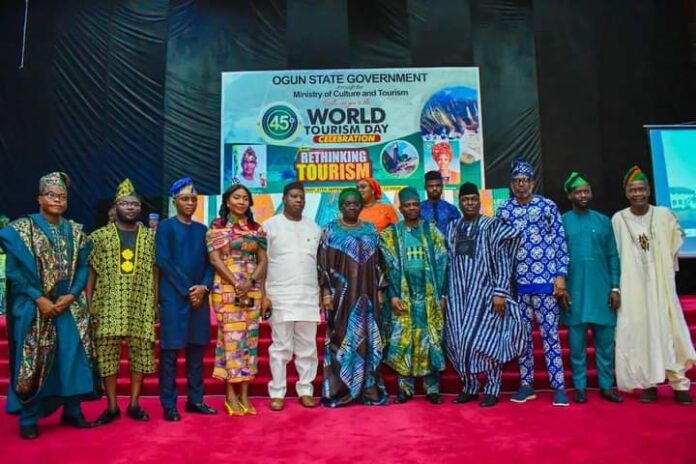 Towards redefining its tourism approach for sustainability, Ogun State Government says it will continue to harness a clear implementation framework, adequate financing, technology investments, infrastructure and human resources, among others.

The Governor, Prince Dapo Abiodun made this known at the 45th World Tourism Day celebration at the June 12 Cultural Centre, Kuto, Abeokuta, with the theme: “Rethinking Tourism”, saying government appreciates the capacity of tourism as a viable means to economic diversification.

Represented by his deputy, Engr. Noimot Salako-Oyedele, Governor Abiodun stated that his administration had invested heavily in capacity building of tourism personnel to broaden their knowledge and increase productivity.

He added that “through various initiatives, such as advocacy and awareness campaign, my administration is determined to empower more youths and women, particularly in tourism-related fields to increase the tourist and economic value of the State”.

The State helmsman implored stakeholders, particularly those in the private sector to rethink the investment opportunities that abound in tourism by intensifying their collaborations with the government to enhance its revenue generation.

In her address, Commissioner for Culture and Tourism, Hon. Adijat Adeleye-Oladapo, said the Ministry had been working to evolve better marketing and promotional strategies that would encourage investors and foreigners to visit various tourist sites across the State.

Pololikashvili noted that every part of the sector, from UNWTO and governments at the top down to small businesses at the bottom, should rethink and restrategise on how to achieve the goals which require restructuring business models, pointing out that “we need new voices, as well as new ideas if we are to transform our sector and build better tourism for all”.

Earlier in his address, the Permanent Secretary in the Ministry, Mr. Olusegun Olaotan said the Prince Dapo Abiodun-led administration was poised to approach tourism in a holistic perspective to engage all other sectors and activities in the tourism value chain which include but not limited to aqua-tourism, agro-tourism, medical tourism and transportation in ensuring that tourism gets to the next level in the State.