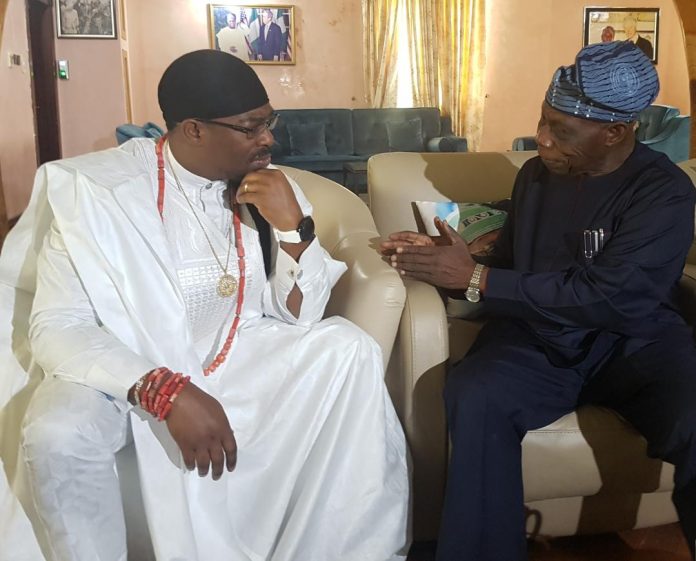 The Dein of Agbor, His Royal Majesty Benjamin Ikenchuku(Keagborekuzi I) has disclosed that former President, Chief Olusegun Obasanjo is sensitive to both the wishes and pains of the North, hence, his recent statement for better Nigeria should be listened to in the interest of all.

The monarch also called for dialogue between President Muhammad Buhari and the Elder statesman as both possessed the qualities to achieve peace and overcome the socio-economic challenges of the country.

The Dein, who spoke shortly after visiting Obasanjo in Abeokuta, yesterday, affirmed that contrary to claims against the former President, “he remained an Elder statesman that is committed to the progress, peace and unity of this country, irrespective of positions in certain quarters. His views have not changed about Nigeria even as at today that I met him.

“I have known Baba now for almost 20 years. He’s the President I came to know when I came back to Nigeria in 2000. He’s the President that I admire. Some people say so many things about this old man, which I found to be very untrue. All the negative things they say about him, even before I met him, I found out they were lies.

“Whether anybody likes it or not, Obasanjo is an elder and a statesman, who has served as Head of this country and led in different capacities. This is somebody that is well respected by the international communities too.

“So, if somebody with this kind of experience and knowledge is saying something, the Nation should listen. We have a problem in this country and that is how we dialogue, which is sometimes abrasive and disrespectful and that is not how brothers and sisters should be living because, we are brothers and sisters. Obasanjo, is very sensitive to both the wishes and pains of the North as well as we here in the South.

“These two portions of the country neither can do without each other. We are one people. God put us together in this country and we need to sit down and solve this problem together.”

The Monarch emphasized that with the military background that President Buhari shares with Obasanjo, it was evident that the two could still “continue a dialogue that those around them would not cause any kind of freezing in their relationship. They both need each other to be able to help steer this country forward.

He said the deplorable condition of the Badagry road (which he took on his way back from Cotonou, Republic of Benin, where he was made a Chancellor of a University, the first to be conferred on any Monarch from Nigeria), the Fulanization issue, the country’s security situation and the Kano government/Emir crises made him to come over to Abeokuta to see Obasanjo for discussion.

The Dein Agbor hinted that similar visit would be made to the President, even as he commended and thanked President Buhari for reappointing one of his sons and Governor of the Central Bank of Nigeria (CBN), Godwin Emeifele.

“I am not trying to gain anything from these visits, but to help our great country.  We want peace, unity and be a fruitful country. We must get back to the good times of this country. I will also try to get to the governors too, we must just get back that is my concern now. Things are not just going right.

“Let me use this opportunity to commend and thank Mr. President for giving us back for the very first time, a two-term CBN governor, Godwin Emeifele, a worthy son of Agbor. I felt it would have been very dangerous if he had been changed at this sensitive time of our economy situation. So, I have to thank Mr. President for that.”

On his take away from the visit, the traditional ruler expressed happiness that Obasanjo was still strong and still interested in the country, “because at this point, he does not have to continue to give his all for the country.

“He has served enough. But I can see that there is still genuine concern for this country either he gets it right or wrong. We need to respect the fact that this man still loves Nigeria. He is not perfect and he never claims to be perfect because he’s not God. Only God is perfect.”