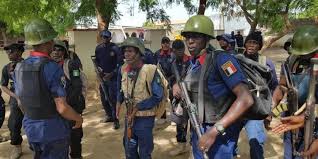 As part of its constitutional mandate to protect lives, property and federal government infrastructure, the Nigerian Security and Civil Defence Corps (NSCDC), on Monday beefed up security patrols across the 23 Local Government Areas of Kaduna State.

The development, authorities say is to curtail the activities of criminals who plan to make money by all means to celebrate the yuletide.

In a statement on Monday, the Command’s Public Relations Officer, DSC Habeeb Badamasi, said the state’s Corps Commandant, Idris Yahaya Adah disclosed this while addressing Heads of Department, Units, Area commanders and Divisional officers during a meeting at the state command Headquarters on Monday

He vowed to deal with criminals, electric cable vandals, pickpockets and other unlawful individuals who will try to make the state ungovernable these ember months.

According to the statement, although, there has been a 24 hours patrol in the state, there is still a need to beef up security around the nooks and crannies of the state, as we gradually move towards the end of the year, he said

He urged residents in the state, to be security conscious as criminal-minded individuals devise several ways to steal, these ember months.

According to him, security personnel are already stationed in strategic places to monitor and arrest criminals or those who will try to vandalize federal government property.

Commandant Adah while appreciating the efforts and vision of Commandant General, Dr. Audi for providing a patrol van to the state, warned criminals in the state to repent, as their days are numbered.

He commended officers and men in the state for the recent arrest of five vandals and urged them to do more to get rid of criminals in the state.

Commandant Adah, while advising the residents of the state to be security conscious, urged them to always report strange faces and people of questionable character for prompt arrest and investigation.