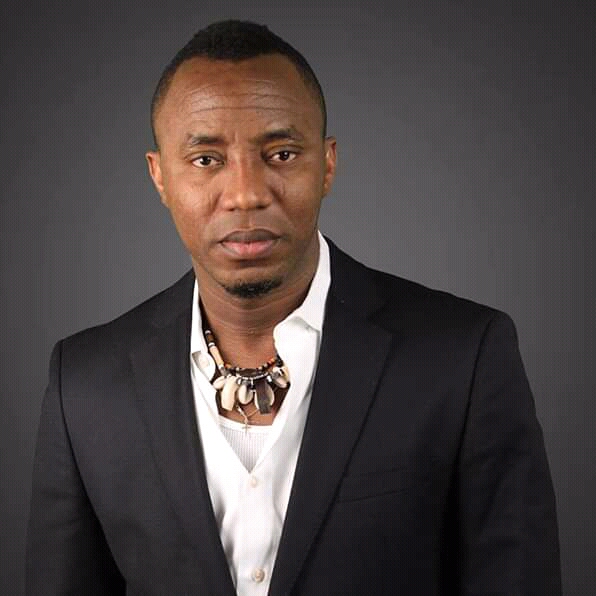 Sowore said if Buhari was sincere about stopping electoral malpractice, he would have focused on the sponsors of ballot box snatchers and not the actors only.

The AAC candidate said this during an interview with our correspondent on Wednesday.

The activist said Buhari had shown that he was still a dictator as he made no mention of arresting and prosecuting ballot box snatchers but went ahead to suggest killing.

He said if the President was really serious about stopping electoral malpractice, he would have stopped his part from engaging in vote-buying.

Sowore said, “General Buhari is clearly still a military dictator at heart. Ballot box snatching is a terrible offence, but how could anyone ask for an offender to be killed without recourse to the law? Are there no courts? Shouldn’t an offender be charged to court first?

“It is ironic that the same person who is quick to ask for ballot box snatchers to be killed, has no problems with heading a party that engages in massive vote-buying and rigging as we saw in Ekiti and Osun.

“While Buhari called for the ballot box snatchers to be killed, what about the people who sent them to snatch the ballot boxes? What about the politicians who paid them to cause chaos at the polls? By raising the spectre of violence at polling centres and encouraging law enforcement agencies to shoot during elections, the President is essentially scaring people away from the polls.

“He knows that ballot rigging has been a sad but persistent feature of Nigerian elections. This threat is not really directed at ballot box snatchers, but a deliberate attempt to scare people away from the polls. I call on all Nigerians not to be deterred or scared away from the polls.”

The Sahara Reporters publisher, who also lambasted the Independent National Electoral Commission for postponing the polls, said he already knew INEC would delay the elections and he had prepared adequately.

He said the All Progressives Congress and the Peoples Democratic Party were the biggest beneficiaries of the postponement because they were the richest parties in the country.

When asked if he had the N800m needed to deploy polling agents in all the polling units and voting points across the country, Sowore said he did not need such a an amount because people were willing to volunteers.

Sowore added, “We are a true grassroots organisation. The ‘TakeitBack’ movement and the African Action Congress are present in every geopolitical zone and in every state. We will have agents in every state and in most of the polling units in the nation.

“We introduced digital methods into the agent recruitment exercise. In addition to the physical compilation of the names of those interested in being party agents, we developed online methods and an app that allowed us to mobilise agents as well.

“Unlike the APC and the PDP that will pay about N5,000 to N10,000 per agent and spend between N600m and N1.2bn on them across all the polling units in the country, we are a volunteer driven organisation.”

The former student union leader, who fought for the mandate of the acclaimed winner of the June 12, 1993 election, MKO Abiola, said he was not deterred by the decision of some of MKO’s children to endorse Buhari following the President’s decision to declare June 12 as Democracy Day.

He said Buhari did so for political reasons but admitted that it was a good decision.

Sowore said, “The June 12 struggle was not about Abiola or his family. It was about moving Nigeria forward. My engagement in that struggle was to ensure that we had a country where democratic tenets reigned supreme, where military dictatorship was eliminated and where the Nigerian people could freely choose their own leaders.

“In all of the 30 years that I have been involved in the Nigerian political system, I have not supported persons, but instead I have fought for principles. When Obasanjo wanted to extend his tenure, I fought against that.”

When asked if he would accept the result of the election if he loses, Sowore said he would only do so if the exercise is free and fair.

On what would be the focus of his administration if elected, Sowore said he would focus on security, restructuring, infrastructure and the enthronement of democratic norms.

He said he would form a shadow cabinet once he is declared winner and this would allow for an easy transition.

Sowore said, “I have developed a 10-point agenda built on three pillars of security, self sufficiency and sustainability. The 10-point agenda addresses problems in the areas of security, power, infrastructure, corruption, economy and jobs, restructuring, health care, education, agriculture and tourism and the first letter of each program spells out SPICER HEAT.