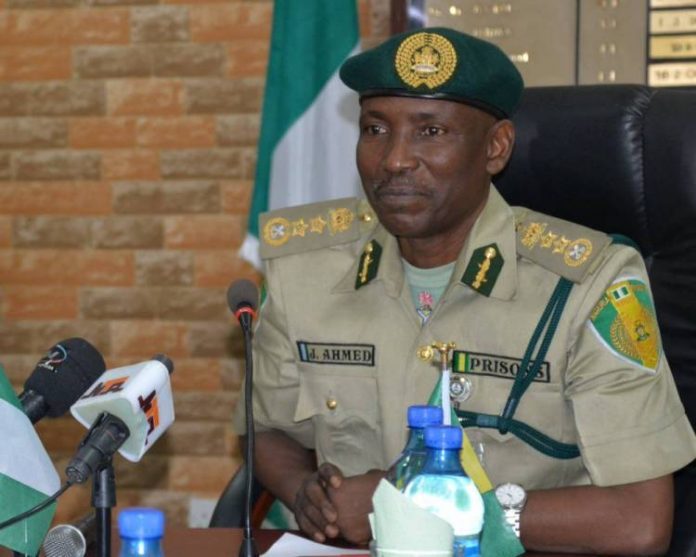 The Controller-General of the Nigeria Prisons Service (NPS) Mr Ja’afaru Ahmed, on Wednesday decorated 14 newly-promoted senior officers of the service with their new ranks.

Speaking at the ceremony in Abuja, Ahmed said that the newly decorated officers were among the 16 personnel that were recently promoted.

He said that the officers were promoted to the rank of Assistant Controller General (ACG) adding that out of the newly promoted officers, two that were not decorated had already retired.

“The Nigerian Prison Service has tried to tackle the issues of stagnation since 2016.

“No fewer than 79 officers sat for the examination, though there were 16 vacancies, 14 officers were selected, but not just because they passed their examination, but also because of their loyalty and character at work.

“Promotion had become an issue as people spend 17 years in service without getting their promotion,’’ he said.

He said that with the elevation, the yoke of stagnation of personnel in the service had been broken and urged the beneficiaries to live up to the expectation of their new status.

The controller-general also said that the exercise was carried out to boost the morale of the personnel, and congratulated them on their elevation.

He urged the wives of the newly promoted officers to make the homes conducive for their spouses so that the officers would be mentally balance to give their best to the service.

In his remark, the Commissioner in charge of Appointment and Promotion, Maj.-Gen, Emmanuel Bassey (rtd), noted that some names were erroneously omitted, but promised that those affected would sit for the exams in due time.

“I want to Pledge that those names would be looked into, and they would sit for the exams soon,” Bassey said.

The commissioner also advised the newly promoted officers to be diligent and loyal in their service.

“You must prove to the nation that it was no mistake promoting you and getting you all to this level,’’ he said.