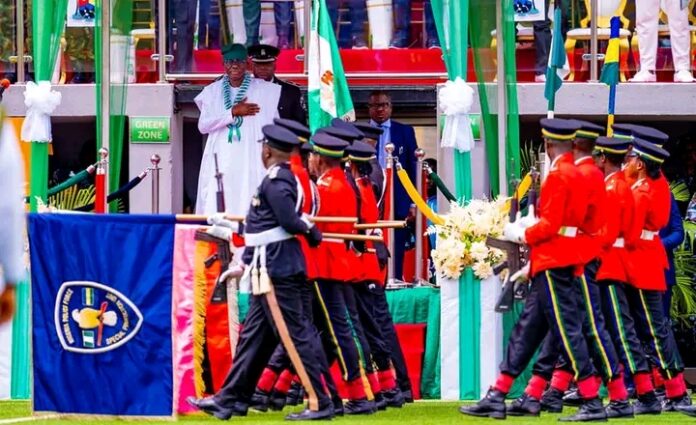 Lagos State Governor, Mr. Babajide Sanwo-Olu has acknowledged the resilience of Nigerians in the face of the present economic situation in the country, assuring that the country is already on the path of greatness economically, politically and in other spheres of life, despite its numerous challenges.

Speaking at this year’s independence day parade in Lagos, held at the Mobolaji Johnson Arena in Onikan, the Governor said that the 62nd commemorative anniversary of the country presents another opportunity for the residents to be grateful to God.

According to him, “Every 1st of October is a time to reflect on the journey of our nationhood, to rededicate ourselves to the task of nation-building and continue to work hard at building a formidable nation in Africa and the world at large”.

“This year also marks the 23rd year since the birth of our 4th Republic, our most successful democratic journey in the history of our nation. We truly have a lot to be grateful for.

Amidst many odds and challenges, we have continued to exist as one strong country, recording progress on many fronts. Even if we are not always where we would like to be as a nation, there are clear signs of slow and steady progress”, he added.

While expressing confidence and hope in the continued progress of Nigeria, the Governor informed Lagosians and Nigerians as a whole that the country will regain its lost glory and fulfil the dreams of the nation’s founding fathers who laboured for Nigeria’s independence several decades ago.

He paid tribute to all past and present heroes, particularly, those who laboured and sacrificed, as well as all who continue to labour and sacrifice for hope, unity and nation-building.

“I wish all Lagosians a Happy 62nd Independence Anniversary and pray that the labour of our heroes past and present shall never be in vain”, he added.

While maintaining that the anniversary offered Nigerians an opportunity to reflect deeply on the country’s journey to nationhood, the Governor called for dedication to the task of nation-building by the youth and the entire populace.

Governor Sanwo-Olu also used the opportunity of the Independence Day Celebration to call on Nigerians, especially the electorates, to focus on an issue-based campaign against promoting politics of division and bitterness as the country prepares for next year’s general elections.

His words: “As the 2023 general elections approach, I enjoin everyone to focus on issues and refrain from the politics of division and bitterness. We must respect divergent opinions and respect the fact that the beauty of democracy lies in the fact that we will not all share the same ideological and political views”.

The event witnessed a parade by different Paramilitaries, School Children, Teachers and Traders, while members of the State Executive Council, Body of Permanent Secretaries, Diplomatic Corps and other dignitaries were in attendance