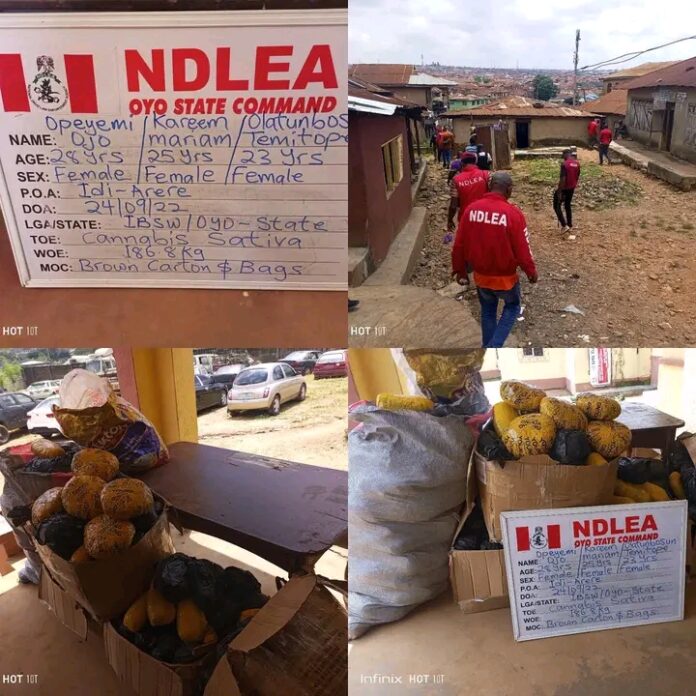 The National Drug Law Enforcement Agency, Oyo State Command, under the leadership of Abdullah Saeed has arrested 72 seventy-two suspects, within the third quarter of the year.

The Public Relations of the Command, Okuwobi Mutiat, a Chief Superintendent of Narcotics said the suspects included 52 males and 20 females within the age range of 17-60 years.

She added that they were nabbed for dealing in drugs such as Cannabis sativa, Cocaine, Tramadol, Diazepam, Rohypnol, Colorado, codeine, amphetamine, skoochies and cake mixed with cannabis.

Okuwobi revealed that the Command recorded total seizure of 502.076kg of Cannabis sativa and other narcotic and psychotropic substances during the period under review.

Not only that, none drug exhibit including locally fabricated pistol with One(1) cartridge and four rounds of 9mm live ammunition were recovered.

Also within same period, 17 suspects were charged to court, 13 were convicted for various drug offences with jail terms ranging from six months to four years imprisonment.

The Command gave brief intervention in terms of counselling to 38 People, Who Use Drugs (PWUD) with 30 males and 8 females.

The State Commander, Abdullahi Saeed, Commander of Narcotics advised the public to compliment the effort of NDLEA in it’s bid to rid the state of illicit drugs

Ondo wife kills husband over telephone call to another woman