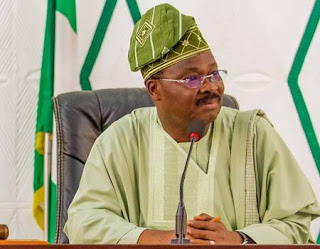 With his two terms tenure coming to an end in 16 days time, Governor Abiola Ajimobi of Oyo state, on Monday, lauded his achievements over the past eight years, particularly thanking residents of the state for their support all the way.

Speaking when the management of the University of Ibadan visited him at governor’s office, Ibadan, Ajimobi said he was appreciative of the opportunity given him by residents of the state because he was the first governor to serve for eight years in the history of governance in the state.

In eight years, Ajimobi avowed that his government had excelled in peace and security; physical infrastructure, especially roads; education, by encouraging private/public involvement in the running of schools; and health, through the health insurance scheme and renovation of health facilities.

This is as he said his strides in improving the psyche of the people to shun the culture of impunity and substitute dependence for productivity will stand the test of time.

“I thank the people of Oyo state for the support given me and the government, being the first to use eight years in the history of governance of Oyo state.

“Generally, we have done a lot in improving the psyche of our people, in reducing culture of impunity. We have also reduced culture of dependency; we are now looking at education from the angle of promoting the ability, capability of our people to be productive.

“Hence all the many things we have been able to do in Oyo state till today has been through the support of the University of Ibadan, our own vision, our own courage and by all the key performance indicators, we have taken Oyo state higher than a level that we get it, whether in physical and social infrastructure, security and peace, education, health,” Ajimobi said.

Furthermore, Olayinka praised Ajimobi for his resourcefulness in the management of the state, particularly in road infrastructure across the state and his good rapport with the university community.

Prior to the UI team’s visit, Ajimobi had also received the French Ambassador to Nigeria, Jerome Pasquier in his office.

Corruption fight will be frontal in President Buhari’s new administration –...