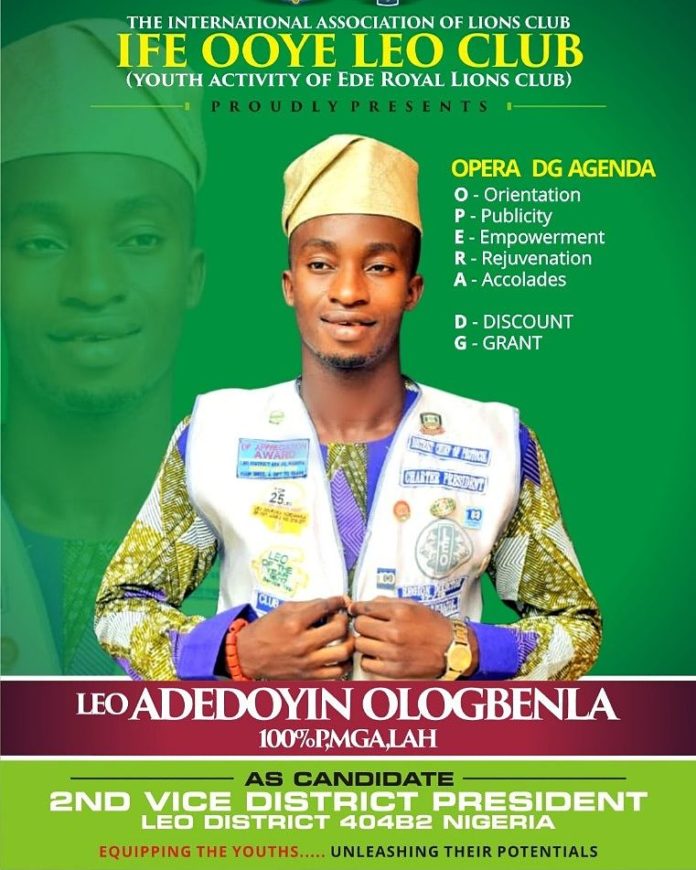 A contestant and  candidate of Ife Ooye Leo club in the forthcoming LEO MD404 Election Leo Adedoyin Ologbenla 100%P,MGA,LAH has debunked rumors that he has stepped down and withdrew his intention to contest as the Second Vice District President of Leo District 404B2 Nigeria.

The  candidate in a statement by his club President Leo Adeojo Esther on Monday debunked the rumour which claimed he has been persuaded to step aside for his opponent In the forthcoming election.

“Leo Ologbenla Adedoyin has not stepped down for anybody. He remains the candidate of our club  for the election,” Leo Adeojo Esther said. My candidate has received various calls from those who believed in him and asking why he withdrew from the race.

“Though he was invited for a meeting with Osun Lions at osogbo Where he was urged to step down, and adding that they know he has spent money and he will be refunded, but He did not have any agreement with any of the personalities,” he only said he has to make consultations before he take any decision. And as at TODAY, he has made up his mind to partake in the electioneering process and he is ready to accept the outcome of the election either good or bad, she added.

Leo Adeojo Esther further urged the entire Leos who believed in the OPERA DG AGENDA to reject any fake claims that the  candidate has stepped aside for another person and assure the that Leo Adedoyin Ologbenla will never step down from the race.

While gathering this information, Leo Ologbenla Adedoyin said according to Frantz Ganon “Every generation out of relative obscurity discover its mission either to fulfill it or betray it” and I have chosen to fulfill the mission I have started to Leos across the district.

In his own word, the OPERA DG CAMPAIGN CHAIRMAN Leo Rasaq Ibraheem said I see no reason why a candidate should be asked to step down since both of them are from Osun, he frowned at the way th politicking is being handled and said the best advice which I think should be given is to maintain a peace and rancor free campaign and urge both candidates to support whomever wins.

Lastly,   we must really acknowledge and appreciate the efforts of all concerned lovers who placed calls to confirm the rumors and input their own contributions into the OPERA DG AGENDA we will never let you down. We seal our ink and beseech the future leaders “from when shal the blaze come to help blow off these ashes and make our charcoal glow again?  Let us always remember the Nigerians prayer

DIRECT OUR NOBLE CAUSE

HELP OUR YOUTH THE TRUTH TO KNOW….

#at the end of the tunnel comes the light

Amangla Awethu (Nothing shall discourage us)