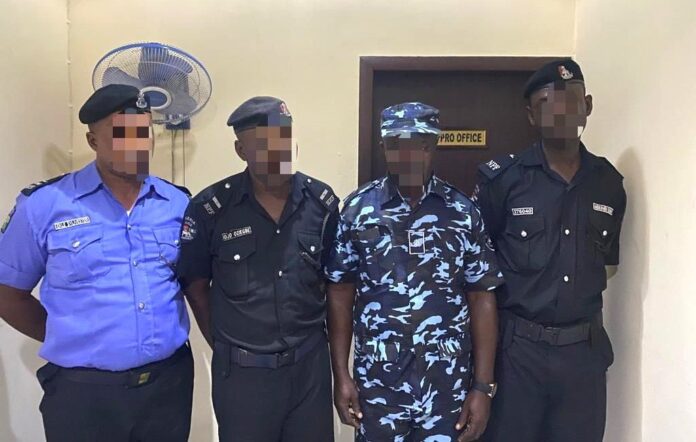 The Lagos State Police Command is under fire for concealing the faces of policemen arrested for extortion.

On Thursday, a youth narrated how the officers stopped him and called him a ‘Yahoo boy’, the Nigerian slang for internet fraudster.

In a lengthy Twitter thread, the victim, Oluwagbadura, recalled how he was accosted at Soloki in Aguda, Surulere.

Though the officers did not find anything on him, they seized his phone and company laptop.

“They searched my phone. They called me a criminal for chatting with my friends on WhatsApp.

“They threatened to shoot and lock me up! Next, they took me to their station, then forced me to admit to being a criminal.”

After subjecting the young man to trauma, the police team then asked him to write a statement and bail himself.

One of them also threatened to deal with Oluwagbadura while he’s in the cell and boasted nothing would happen.

On Friday, Police Public Relations Officer in Lagos, SP Benjamin Hundeyin announced that the culprits were summoned to the headquarters.

“The complainant positively identified them all. They have been handed over to the Provost department for appropriate disciplinary measures”, the spokesperson added.

But the blurred faces of the officers have got Nigerians talking; some accuse the police of covering the identity of bad eggs who should be exposed.

Some reactions to Hundeyin post: @becca4gold: They are criminals, show their faces.

@JerryPiticle: You don’t need to blur their faces abeg. Let’s know our enemies

@okoye_inc: When you told us the story of Ice Prince, you did not censor his face.

@sajbaba100: Why do we still call their offence extortion, it is armed robbery because they terrify and threaten you with their guns and force you to do what you will otherwise not do…same as non-uniformed robbers. I think we should take note.

@Ogalachidubem: Oga why blur their face, aren’t they criminals or you are protecting their already dented image?

@urch_dollars: Why u dey cover their faces? Tomorrow, we go still see them for road.

@mj_esong: 1. Why are their faces covered since the NPF usually display faces of suspects; 2. Hope after disciplinary measures within the NPF, they’ll be treated like the armed robbers that they are.

@PastorDJDaniels: Kindly repost their faces as ordinary citizens are openly paraded. You could do more by answering the popular voice of reason.

@oyinnex: I don’t understand why their faces were blurred sha. One no even get name tag. Maybe na ur boy be that.

@jaybrizzy: Parade suspects for photo shoot. E reach your boys that have been found to have extorted money from an innocent person you blur out their faces? I didn’t know you guys can be this considerate to criminals.

@oga_pharmacist: You blur the face of officers that have been positively identified to have committed crimes, but you expose the faces of “yahoo boys” and others? This is nonsense, stick to a standard.

@uBeRToKS: You expose the faces of suspects but cover the faces of confirmed offenders? What is good for the goose, no good for gander again?

@oddminers: Why blur the faces? The complainant said they were 6. We see only 4. If you don’t shame these criminals, others considering the act will feel protected.

@fisayosoyombo: Why is the police covering the faces of officers who have been investigated and confirmed to have criminally extorted an innocent civilian, though? That’s tacit encouragement of bad behaviour!

Hundeyin replied: “Even a person caught red handed committing a crime remains a suspect pending judgment. Their trial has commenced. For those not happy about this, kindly sponsor a bill to amend the law. There is provision for that in our laws.”

With a photo proof in response to the PRO’s comment, @jem_fuvbe quipped: “Why did you cover their faces but exposed the faces of the civilians who are still under investigation?