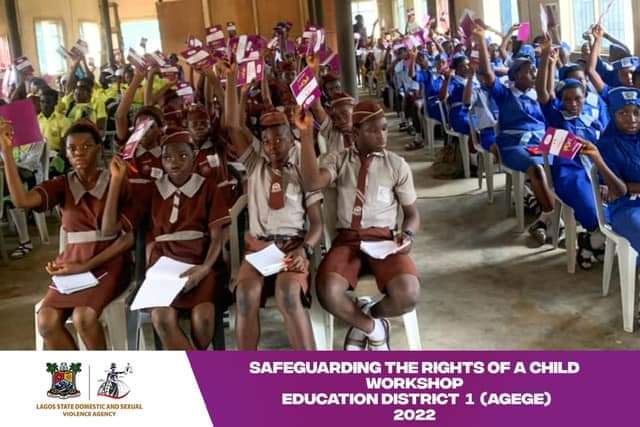 The Lagos State Domestic and Sexual Violence Agency (DSVA) has commenced the engagement of Primary and Secondary School Students on its Safeguarding the Rights of a Child (STRAC) initiative as part of efforts to curtail domestic and sexual abuse in the State.

Speaking at a workshop held in Education District I, Agege, the Executive Secretary of DSVA, Mrs. Lola Vivour-Adeniyi, stressed that children have a prominent role to play in the STRAC initiative.

She explained that STRAC is an interactive workshop to engage children in age-appropriate language on their rights, responsibilities, body safety, sexual abuse, self-defence tips, preservation of evidence in case of physical or sexual abuse and, ultimately, encouraging them to speak out and report abusers.

Mrs. Vivour-Adeniyi noted that the prevention workshop, which was facilitated by trained peer educators with vast experience in gender relations, socialisation, dating violence and sexual violence prevention, will go a long way in curbing incidents of child abuse in Lagos.

Her words: “The goal is to empower millions of children to ensure that they are able to prevent the occurrence of domestic and sexual abuse in Lagos State”.

Asides from verbally engaging students on their rights and responsibilities, the Executive Secretary added that there are STRAC textbooks prepared by the Lagos State Domestic and Sexual Violence Agency to strengthen the reading culture of children, empower them and serve as a preventive tool against all forms of abuse.

She expressed satisfaction with the success of the programme given the active participation of the students and how the programme has empowered them to speak up in all cases of abuse.

Hinting that another workshop would soon be held for about 3500 students from 31 primary and secondary schools in Lagos State, the Executive Secretary stated that the upcoming event is aimed at enlightening youths on safeguarding the rights of a child.

The workshop had in attendance about 750 students drawn from different Secondary Schools across the State.