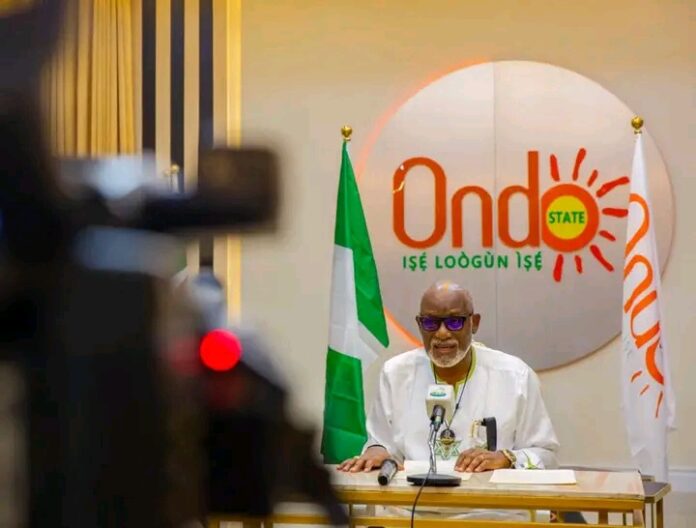 Chairman of the Southern Nigeria Governors Forum and Ondo State Governor, Arakunrin Oluwarotimi Akeredolu, SAN, has called for concerted efforts to address the myriad of challenges confronting the nation.

Governor Akeredolu made this known in a statement signed by Chief Press Secretary to the Governor of Ondo State, Richard Olatunde on Friday and obtained by Tropic Reporters correspondent.

Governor Akeredolu stated that the country is in dire need of power devolution that will sustain the regions, reduce agitations and tackle the country’s challenges holistically.

The Governor, who congratulated Nigerians on the occasion of the 62nd Independence Anniversary, urged the people to reinforce their hope in the country and embrace peace.

Arakunrin Akeredolu also called on the people to be deliberate in making the right choice in the 2023 general election.

“This occasion affords us yet another opportunity to reflect deeply on the current challenges confronting our nation and offer candid suggestions which will assist in addressing them.

“No doubt, our country is going through difficult times. It is time for us to rethink this pseudo federalism and heed the calls by sub-nationals to restructure the polity in a way that will engender progress and development. It is the only way to solve the current socio-economic problems facing the country.

“The federating units must not be over-dependent on the Federal Government. The over-centralization of the polity is the very bane of our collective existence as a country. There must be a total departure from this tread. The current situation must not linger for far too long.

“The sub-nationals has the capacity to fight crimes and criminalities efficiently and effectively if proper devolution of power is undertaken. The security challenges bedeviling the country have necessitated the need for state security outfits to be empowered and allowed to function optimally with the right tools and ammunitions.

“Our gains as a nation are manifested in the well-being of our people. Our efforts must be geared toward actions that will restore their confidence and give hope. The people are central to the existence of any government. Our attention must be shifted primarily to them. Development of any given space must be about the people.

“The stark reality confronting us as a people is that the current security arrangement can no longer guarantee effective security of lives and property. The sub-nationals must be encouraged to take charge of the internal security arrangement of their localities. It is crucial for our collective well-being,” Governor Akeredolu said.

The Governor also commended the President Muhammadu Buhari administration for its giant strides in infrastructure such as roads, rail, power and other developmental projects.

On the 2023 election, Governor Akeredolu called on the people to support a candidate with years of investment, competence, capacity and reach. The Governor also charged the people to reflect on the need to promote equality and fairness by shifting power to the South.

He expressed hope that the country will surmount its perennial challenges and prosperity, peace and development will echo across the nation.