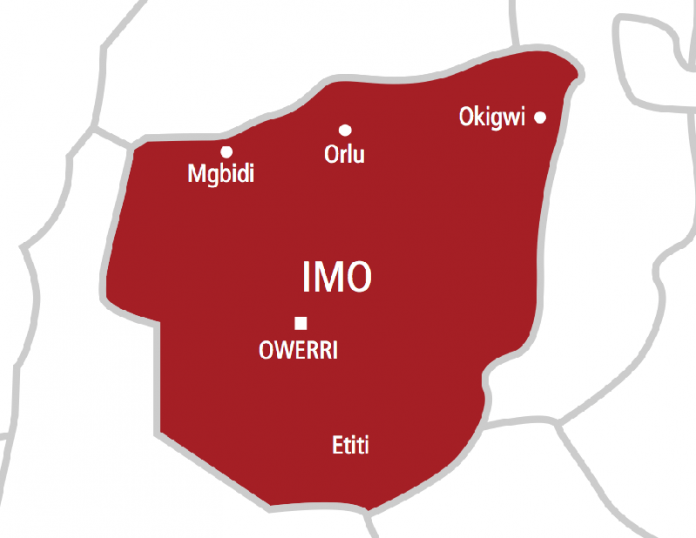 Imo leaders has urged Governor Emeka Ihedioha to remove the Eshi of Nkwerre, Eze Chijioke Okwara from the throne for fomenting a crisis capable of destroying Nkwerre and making life insecure for the people.

The leaders spoke on the volatile situation, the high-handedness and selfish manipulations of the monarch and a judge in the state.

What appeared to have stirred the hornets is the decision of the Aba trained monarch to sack the leadership of the community union and lock up the village hall.

At a press conference in Lagos, the leaders descended on the monarch, accusing him of destroying the unity of the ancient kingdom, silencing the people and sponsoring thugs.

They urged the National Judicial Council to call the female judge to order.

President General of Nkwerre Aborigines Development Union, Engineer Sam Akanno, the Akaraka Nkwerre, Chief Mike Allison- Ikwuagwu and other leaders accused the traditional ruler of Nkwerre ancient kingdom of arrogating more powers to himself, igniting crisis and working against the interest of the people.

They said the monarch had no power to oust the executive committee from office and install his cronies to do his bidding.

The predicament of the community leaders started in 2003 when the people resolved to create more autonomous communities.

The monarch’s strongest point of disagreement seemed to have been the call for the division of Nkwerre into four autonomous communities (Confederation of four Ofor).

‘’The monarch have never hidden his contempt for the division of Nkwerre into four autonomous communities’’ the leaders said.

Specifically, the monarch vowed that if the leaders failed to do his bidding, he would further wield a bigger hammer by taking stronger measures.

’The monarch showed his true colours when he angrily questioned the registration of the old union by the Corporate Affairs Commission (CAC). After a futile effort to stop the registration of the union, the monarch sacked the executive committee. He moved a step further to bar members of the union from holding meetings. He drafted thugs to the hall to bar us from meeting ’’ the leaders said.

Coming after the monarch’s supporters’ show of shame against the union, the eldest brother of the monarch, Ekezie Okpara and other members of the communities declared their opposition to the move by the monarch to become chairman of the union’s board of trustees.

‘’The Union’s Constitution has a function for the monarch. He is our Grand Patron. He cannot be grand patron and chairman of the Union’s Board of Trustees at the same time’’ the leaders said.

The community leaders accused the monarch of appropriating the resources of the communities, destroying Nkwerre Aborigines Union and plotting to create another village in view of taking the community lands.

‘’Our community is in crisis because of the selfish ambition of one man and his cronies. The monarch is not a good leader. He is creating problem in the kingdom. He is hiring thugs to destroy the kingdom’’

In a combative mood, Ikwuagwu accused the monarch, a former commissioner in Imo State, Chief Uzoma Nwosu-Iheme and other cronies of the monarch of plotting to remove him as OJI OFOR of Nnanato.

‘’ The monarch is very desperate. This is against our tradition. He wants to kill me. The monarch, Chief Uzoma Nwosu Iheme and others directed thugs to lock Obinihu Hall, the venue of our annual meeting’’ Ikwuagwu said.

They alleged that a super-rich female judge was influencing the judiciary from hearing the matter and using strange wealth to oppress the people.

‘’We want President Muhammadu Buhari, Governor Emeka Ihedioha, the police and NJC to rescue our people. We want the police to investigate and arrest those behind the killer squad that opened fire during our union’s meeting. We want NJC to probe the finances and activities of the judge conniving with the monarch. We want justice for our people’’ the leaders said.

The declaration by Nkwerre leaders represents what observers considered as a vote of no confidence in the iron-fisted monarch.