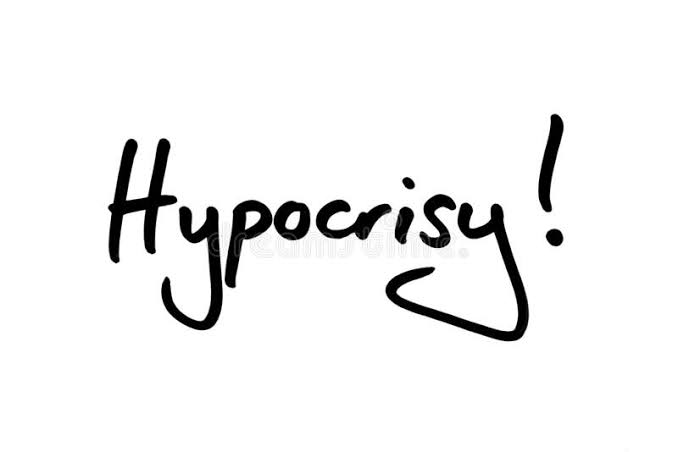 The term ‘hypocrisy’ is said to derive from the Greek words ‘hupokrasis’ and ‘hupokrinesthai’, the former meaning ‘acting a part’, and the latter meaning ‘to act on a stage’.

Hypocrisy is defined as the practice of claiming to have moral standards or views to which one’s own behavior (or the behavior of people in our family or tribe) does not meet. It is a pretense of morality that cloaks our inability to meet some predetermined moral code.
We accuse one person of doing exactly what we are doing but believe that it is somehow “different” when that person does it. It is typically caused by an inflated sense of ego and self-righteousness, coupled with an inability to be humble.

According to experts, it is a form of projection, which is a common defense mechanism that takes root in adolescence. It is a way to protect ourselves from harm. When a teenager is accused of some wrongdoing, he/she might claim “well my brother did it too!” Its purpose is to avoid personal responsibility and to gain control over a situation without admitting any wrong responsibility.

At the root of hypocrisy is fear and low self-esteem. We use hypocrisy to avoid looking at our shortcomings and figure out our part in it. It typically stems from a sincere belief that we should not be held to the same standards as others because we have better intentions. Our belief is juster, nobler, and sincerer.

It feels good to be morally superior to someone else. It helps us to avoid humility, which is a very painful emotion. Even the best of us use hypocrisy when we feel attacked. For example, in the workplace, we may enjoy gossiping about our coworker’s poor performance but are secretly concerned about our own job performance. It’s a deflection to avoid dealing with our own problems because we don’t want to be judged.

At the root of hypocrisy is a strong desire to be loved and accepted. The fear of humility and judgment is so powerful, that we use doublethink and cognitive dissonance to avoid facing ourselves.

What is morality? Where does it come from? According to neurophilosopher Patricia S. Churchland in her book Braintrust (Princeton University Press, 2011), morality originates in the brain. She argues that over time the human brain evolved to feel social pain and pleasure. As humans evolved to care about the well-being of others, they also developed a sense of morality.

Robert Kurzban believes that we are all hypocrites. But not to worry, he explains, hypocrisy is the natural state of the human mind. In his book Why Everyone (Else) Is a Hypocrite: Evolution and the Modular Mind (Princeton University Press, 2011), Kurzban asserts that the human mind consists of many specialized units, which do not always work together seamlessly. When this harmony breaks down, people often develop contradictory beliefs.

How is consciousness possible? In Soul Dust: The Magic of Consciousness (Princeton University Press, 2011), psychologist Nicholas Humphrey, a leading figure in consciousness research, proposes a startling new theory. Consciousness, he argues, is merely a magic show we stage inside our heads. This show has allowed humans to become aware of themselves and their surroundings.

Being a hypocrite is one of the worst things you can be called — you’re someone who criticizes others and yet does the same sin yourself. I have not seen a single politician who isn’t a hypocrite.

According to Dr. Susi Ferrarello of Psychology, hypocrites in ancient Greece were actors “who on stage had to pick the right words and right tones to give shape to a writer’s fantasy.” They had the work of interpreting or judging what to say behind a mask, and became known as work as a two-faced person.

Actors were, by nature, hypocrites. They played different roles that they themselves didn’t live by — and how is it much different today? Actors are paid to be someone they’re not, and they do it realistically and brilliantly.

The etymology of the word “hypocrite” comes from the words hypo and krinein in Greek — meaning “under” and “to sift, decide” respectively. The etymology means that actors could sift through or decide upon the right words to use, but the decision came from “under” a mask of the source.

In Greece, it was a technical term, and now, it’s a dirty word in politics and in interpersonal relationships. But in rhetoric and debate, hypocrisy was interpreted as a way to understand the other side, to give more space to a different argument to understand it better.

“In that case, paradoxically, the mask’s function was to create a closer contact with others without being dominated by one’s own inner tyrant: the ego,” Ferrarello writes.

She notes that being in contact with someone else means being a mask, mediating between oneself and others.

Hypocrisy, actually, didn’t have a bad meaning until hypocrisy met politics in the 4th century B.C. Demosthenes made fun of Aeschines, a famous Greek politician who was also an actor, basically the Ronald Reagan of his time.

So are the most sincere and “honest” people actually hypocrites? Are all human beings hypocrites?

Well, yes. As Ferrarello notes, hypocrisy comes from a fluidity, and an embrace of the fact that we can have a multiplicity of the psyche and the ability to be multiple characters.

T.S. Eliot, as Ferrarello points to, once said that Tiresias was the best hypocrite — as a person pretending to do something he cannot. Tiresias is someone who shows that life is ambiguous and incoherent. He is a living paradox — the blind man who is a prophet, who sees better than people with sight can see. Tiresias spent seven years as a woman for stepping on a pair of mating snakes, described by T.S. Eliot in “The Waste-Land” as an “old man with wrinkled dugs”. He is both liar and honest, accepting the paradox of his life as someone genuine as a hypocrite.

Eliot describes Tiresias as “blind, throbbing between two lives,” a unifier between the ancient and modern worlds, embracing his pained role of being many different people at the same time. He is a living paradox, wearing many different masks.

Watch Out For Part 2…