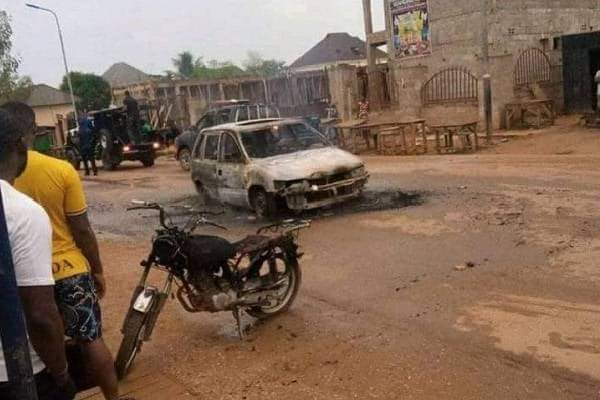 Gunmen have burnt one vehicle and a motorcycle at Ebebe Junction in Abakaliki, capital of Ebonyi State.

According to sources,the gunmen reportedly intercepted the vehicle and motorcycle and chased the owners before burning them.

The unidentified gunmen suspected to be enforcing a two-day sit-at-home allegedly declared by dissident groups in the South-East carried out the attack around 6:20 am on Friday Morning.

The motorcycle operator was said to have narrowly escaped being killed when he came under attack from the gunmen.

A resident of the area, who spoke on condition of anonymity, said the gunmen fired several gunshots to incite fear in the residents.

“I was still inside my shop because I slept there; I heard the gunshots but I discovered later that they left a vehicle burnt beyond recognition while a motorcycle operator told us that he narrowly escaped their bullets.

“It’s so unfortunate that we witnessed such an ugly incident in this area that is usually very peaceful and sprawling with business activities especially at evening periods,” he said.

A team of Police men from the Ebonyi State Police Command and the Ebubeagu Community Security Outfit later arrived and cordoned off the area.

Ebonyi Police spokesperson, Loveth Odah, however said she was not aware of the incident.

“I’m just getting the information from you; I’m not aware of the attack,” Odah said.

The attack came as President Muhammadu Buhari is in the state on a two-day working visit.