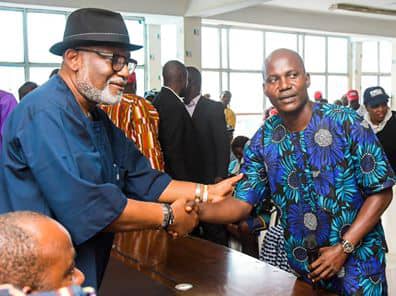 Ondo State governor, Arakunrin Oluwarotimi Akeredolu, SAN, has said the current infrastructural development and the bountiful dividends of good governance being experienced across the State are mere tip of the massive turn – around his administration is poised to entrench in the state.

Governor Akeredolu made the promise at the state secretariat of the All Progressives Congress (APC) during the ceremony to receive over 3000 members of the African Democratic Congress (ADC) into the APC.

The defectors, led by Hon. Femi Bello, include all party executives of ADC in the 11 wards in Akure South Local Government Area, party elders and their followers. 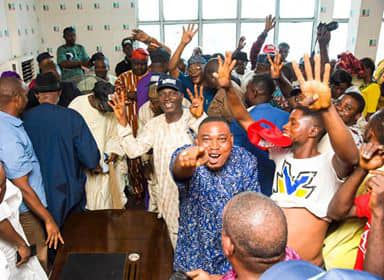 They were received into the APC fold by the state Chairman, Engr. Ade Adetimehin, who later handed them over to Governor Akeredolu, who doubles as the leader of the party in the state.

Arakunrin Akeredolu said the people of the state will witness unprecedented development by the time the deep sea port project is achieved in the state.

He said:”We have just started. We will do more and the people of Ondo State will surely experience massive development.

“We are pursuing the Port of Ondo with all vigor and it will be successful. We have written and the process is on. We will also start our Bitumen exploration 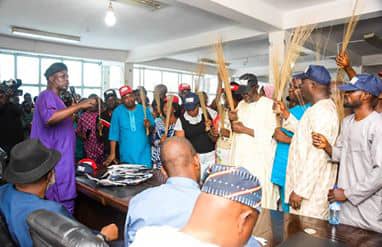 “Go to Ore and see how minimum of 15 trailers now supply cassava for the Cassava-to-Ethanol plant. Even farmers are bringing cassava from other states. Before December, the Ore Flyover will also be ready. We will use the first flyover in the state. ”

The governor charged the new members to attend meetings at their various wards and ensure that the party remains in government.

Speaking, Hon. Femi Bello, who led the decampees, said his decision to lead members and supporters of the ADC in Akure into the APC was informed by the gaint strides of the Akeredolu’s administration in Akure, the state capital.

He said even if the Governor was a native of Akure, he would not have accomplished the milestone of achivements that have been recorded in the state capital.

Hon. Bello particularly lauded the Governor for his intervention in the construction of Oke-Ogba Road, “A” Division /NEPA /Ijoka Road Dualization, Ijoka – Idanre Road, the Orita Obele Road, Iwalewa Road, Aburo Road and the Gaga Road among others.

While commending the governor for the ongoing Dualization of Oda Road, Hon. Bello said the construction of the highly deplorable Gaga road should have been used to name the area after the Govenor as “Gaga Aketi Village”.

He said the collapse of the political structures of ADC in Akure South Local Government to fuse it with APC was an unconditional and unanimous decision of all members of ADC in the Local Government and in appreciation of the remarkable performance of the APC controlled government in Ondo State.

Welcoming the defectors, Adetimehin described APC as a party that treats each member equally with clear-cut welfarist ideology for the masses .

He assured that the decampees would enjoy level-playing ground, emphasising that they have equal rights and treatment as the old members of the party.

The APC Chairman said the unprecedented performance of Arakunrin Akeredolu across sectors and in all parts of the State have made the project of continuity easy for APC in the state.

He said:”The APC is the only ideological party that makes promises and fulfil it. In Ondo State here, Akeredolu’s oppositions have attested to the fact that he has performed well. He inherited seven months salary arrears and has already cleared six out of it.

He has not owed any salary. He’s paying salary and pension as and when due.

“Those who are joining us today are very fortunate. In Akure, look at the township roads and the inter Street roads. If you go to Ijoka very soon, you will know there won’t be traffic jam there any longer. ”

The Chairman stressed the need for the new members to attend meetings regularly, noting that meeting is very important in political party.