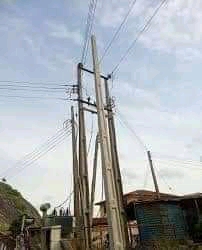 The police in Ondo State have confirmed the death of four kids who were reportedly killed, having been electrocuted in Ile Oluji/Okeigbo Local Government Area of the state.

Spokesperson of the state command, Funmilayo Odunlami, said the electric cable fell on the metal container shop inside which the deceased were staying, killing them.

She said the command has
commenced investigation into the matter.

Two of the four victims were siblings who visited their aunt for the Easter holiday in the community.

The incident happened when some children were playing inside the container.

They were rushed to the hospital, but there was no sufficient oxygen they could use for five of them.

In a reaction, the senator representing Ondo South, Nicholas Tofowomo, said he would ensure the parents of the victims get justice if the Benin Electricity Distribution Company was found culpable of the matter

He warned the residents of the community against erecting buildings or shops under high tension cables or any power supply line.