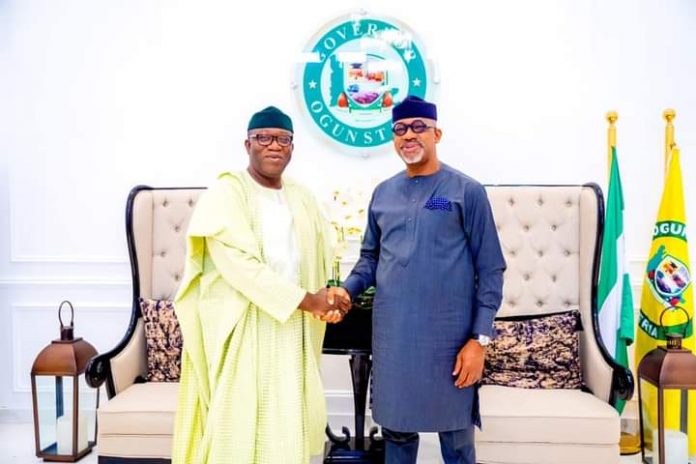 The Chairman of the Nigeria Governor’s Forum (NGF) and the Governor of Ekiti State, Dr. Kayode Fayemi has declared that his Ogun State counterpart, Dapo Abiodun deserved to be elected for second term in office, saying that the governor has performed beyond imagination.

Fayemi who made this known in Abeokuta during a visit to the Governor Abiodun said “As Chairman of the Governor’s Forum, I was elected to protect and to promote every governor who is a member of my forum, so, you shouldn’t be surprised if I want him back”.

Fayemi equally said he was so delighted and honoured to be in the presence of the governor of Ogun State, added that “I am sure you saw me when President Muhammadu Buhari came to commission projects here, that in itself is a statement of what I think of the great work our governor is doing within the short space of time he has been in office,”

The Ekiti State Governor who also commended the recent investment running into hundred of millions of dollars into the Olokola Free Trade Zone and the agro cargo airport by Arise Integrated Industrial Platform, said that such investment couldn’t have been possible without the confidence of investors in the leadership of the state.

“He has demonstrated capacity, he has increased investment, naturally, this is a state that attracts more investment than the rest of us, those of us in the hinterland, because it is close to Lagos. But, on top of that, he has brought to bare his business acumen, his extensive knowledge of the investment terrain to attract a lot more investment,” Fayemi submitted.