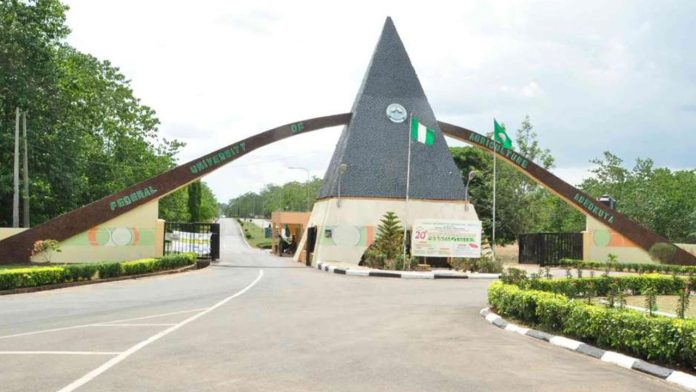 OPEN LETTER TO THE VICE- CHANCELLOR, FEDERAL UNIVERSITY OF AGRICULTURE, ABEOKUTA, PROFESSOR SALAKO ON THE LINGERING TRANSPORTATION PROBLEM AND THE INDISCRIMINATE ARREST OF STUDENTS BY SARS AND EFCC OFFICIALS.

I am Ifemosu Michael Adewale and am dissatisfied and saddened by the Looming Calamitous Implosion rocking Federal University of Agriculture Abeokuta students day to day activities over the lackadaisical attitude and unprofessional management decisions.

This is what is expected of a School like Funaab but intentionally she is not doing that; It could have been Worse!

I have decided to wade into the recent imbroglio militating against Funaabites and share my thoughts unbiased, relating to some personal and General outcry of the students.

Transportation has been one of the Problems Funaabites face Day In…. Day Out but the non-challant attitude of the University management can be grossly seen because the chaos has been lingering for over Two(2) Years and nothing seems to change.

Students lectures starts 9am and it is no more news that Funaabites queue, fight, and struggle to attend classes and also leave the school premises, however The Vice chancellor and the entire University Management team is seen with one or two official car(s); this makes transportation easier for them while student remain stranded and languishing in an unending tragedy.

The Funaab Bureau of Transport (FUNAABOT) has performed below expectations despite millions of naira allotted and allocated to the department for the purchase and renovation of MANCOTS but all went down the drain.

Those monies remain carpeted till this moment.

Again! I read in the News that the Vice-Chancellor of Funaab wrote to the Economic and Financial Crimes Commission (EFCC), men of the Special Anti-Robbery Squad (SARS) that they are free to arrest students found wanting and guilty of cybercrimes.

I would have said it was a good move not until I became a victim and also received report of the arrest and detention of innocent students who were unjustly Harrassed , Extorted and Brutalized.

This is what you get when people who if managing a poultry, would make sure eggs are stolen, are given a University to manage.

It is rather unfortunate that we have accepted the sad reality that relegates our ‘scholars’ to chasers of political appointments- people who are ready to lick butts to be made INEC returning officers, Political Aides, VCs , Directors, Deans and even Head of Departments.

This is the reality here while elsewhere Professors are busy in the libraries and research centres trying to save the World.

How do you expect a Professor who has received over 50 million dollars in grants from Bill Gates Foundation to be hustling to be a Vice-Chancellor, Dean or Director so he can start siphoning monies? He is busy of course! But right here in Funaab, it is the best thing that can happen to a Professor.

It is on this note, I would, as an act of benevolence want to proffer solutions to these shameful and unfortunate events displayed by the power-brokers at the University.

There is a drastic need for the resources of the University to come under democratic control and management which should also involve students.

It is highly unreasonable how the major constituents of a Community are not part of decision making; decisions that affect their well-being and the quality of what they offer the World in the future of work.

The University Management should meet the National Union of Road Transport Workers (NURTW) in the State, the Road Transport Employers Agency (RTEAN) to Foster the diversion of commercial vehicles to ply Funaab Road.

Budget Monitoring Committee involving key stakeholders! Despite an agreement signed between ASUU and the Federal Government as far back as 2013 to check the spending of resources.

It provides for students to be members of the University Budget Monitoring Committee (UBMC). This would bring about the much-talked-about probity and accountability by both parties.

This is therefore a call for Student Union Government under Com. D’ola to begin to organize towards enthroning a radical student leadership on that Campus.

Also there should be Total reversal of EFCC, SARS arresting students indiscriminately in and around the school premises, because more innocent students like me have been Extorted and Harrassed by SARS officials recently.

The EFCC and SARS officials Arrest Students anyhow most especially when the student is Neatly Dressed, Using iPhones, and probably have a TV set and when you ask them what you have done, the Response will be Your Vice-Chancellor invited us and if you don’t cooperate we will make sure the Management (Senate) is informed and your studentship will be terminated!!!

There should be a limit to the Terrifying ordeal of students under this Criminals in Uniform.

Students Rights shouldn’t be violated for any reason(s).

This is not only about the indiscriminate arrest on the students, but also the bad name this act gives to the school; You will agree with me that this doesn’t give the Students and management the deserved honour amongst other Tertiary Institutions in Nigeria.

The Management should be aware that Funaabites needs Promotion in our academic prowess, sporting activities, talent and technological advancement and not Crimes which Gross Funaabites are innocent of.

This would do the University a lot of good if it can be done and effected.

He can be reached via Email: dacomplex2013@gmail.com