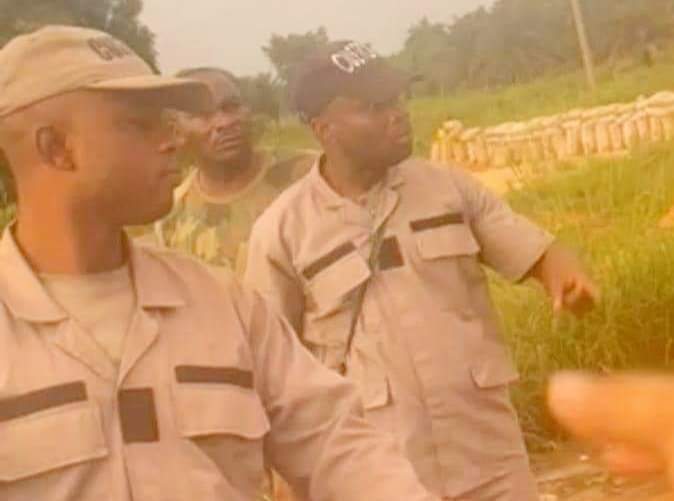 Members of civil societies organisation in Delta state are protesting against the alleged assault on one of their colleagues Mr Samson Nwachukwu,who is an aide to the governor of Delta State, Ifeanyi Okowa, by custom officer, along the Agbor/Asaba Expressway on Saturday.

Human Rights Activist, Harrison Gwamnishu, led the protesters who marched to the Delta state government House to protest the assault.

They said they want justice over the assault by the yet to be named Customs Officer on Mr Samson Nwachukwu.

Mr Samson Nwachukwu an aide to the Delta State Governor, Dr Ifeanyi Okowa, was assaulted by an unidentified Officer of the Nigerian Customs Service on Asaba/Agbor Esxpressway on Saturday 7th of May at about 5pm in the evening.

The Nigerian Customs Service ina release earlier on Monday had acknowledged the incident adding that the members of the Patrol team have been withdrawn and are facing disciplinary procedures following the incident.

The Delta State Government has not made an official Statement on the incident so far but there has been an outrage on Social Media since the Video surfaced online on Saturday Night.

The issue of manhandling/assault of citizens by members of the Security Services has been a controversial one leading to the widely successful and acclaimed #ENDSARS protest in 2020 against the dreaded Police Unit, SARS.

The Unit was later disbanded after much outcry and a protest movement which went on for over two weeks.

The incident which triggered the movement occured in Warri Delta State and this latest incident is an indication that members of the Security Services are yet to learn a lesson from the extremely disruptive protest that gripped the nation for over twoow weeks, led to the loss of lives ad destruction of property.

Observers are now watching what the outcome of the announced disciplinary procedures being undertaken by members of the Patrol team who assaulted Mr Samson Nwachukwu, a Special Adviser to Governor Ifeanyi Okowa of Delta State.