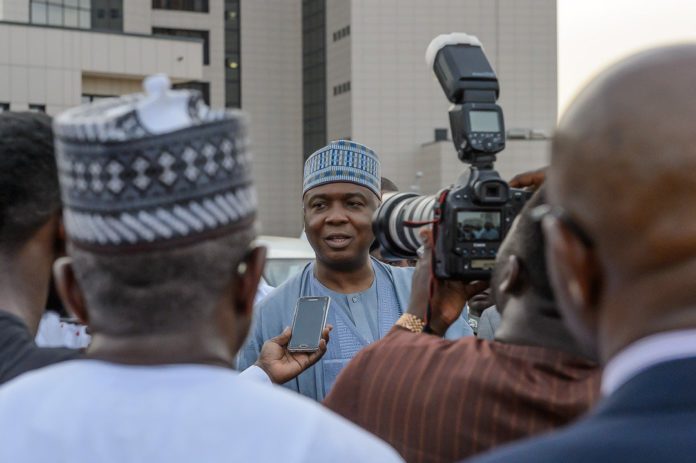 Senate President, Dr Bukola Saraki, has called  on the Federal Government of Nigeria to as a matter of urgency  end the ongoing strike embarked upon by the Academic Staff Union of Universities (ASUU) that is entering its 62nd day.

Senator Bukola Saraki said this according to a statement issued on Wednesday as signed by his Special Adviser on Media and Publicity, Yusuph Olaniyonu, Saraki emphasised the need for Nigeria’s universities to be re-opened without further delay, highlighting the fact that the education of Nigeria’s young people is being negatively affected by the stance of the government and is also disenfranchising the youths, many of whom are registered to vote in their universities — but are now stuck in their homes.

“In November 2016, the Senate intervened in the ASUU strike and met with the officials of the Ministries of Education and Labour, Employment and Productivity and the Academic Staff Union of Universities.

“At that meeting, which was attended by the Minister of State for Education Anthony Anwuka and Permanent Secretary, Ministry of Labour and Productivity in the National Assembly, we agreed that the Federal Government should work to implement the agreement that it reached with ASUU in 2009, and subsequently, we set up a sub-committee to liaise with both ASUU and the Federal Government on this issue.

“The Federal Government must immediately work to address the demands of the Academic Staff Union of Universities (ASUU), because this issue goes beyond negotiations. It is affecting the education of Nigeria’s students, and disenfranchising many of them from participating in the upcoming general elections.

“Make no mistake, we cannot continue this system whereby our universities will be frequently shut down, thereby slowing down the education of our young people — and creating negative bottlenecks that place unnecessary stress on our universities.

“In another vein, our youth make up over 51 percent of registered voters. What does this mean for our electoral process, when young students who are registered to vote in their academic institutions, cannot do so because their schools are shut down? This is unacceptable.

“In this regard, I call on the Federal Government to immediately work on meeting the demands of ASUU and honouring all its prior commitments.

“On our part, the Senate will continue to work to ensure that Nigeria’s education sector is strengthened — and we are ready and willing to collaborate with both the Federal Government and ASUU to end this strike, and ensure that it does not become a recurrent issue,” Saraki stated.

TINUBU VS AMOSUN: BATTLE FOR MOST INFLUENTIAL SOUTHWEST POLITICIAN BEGINS