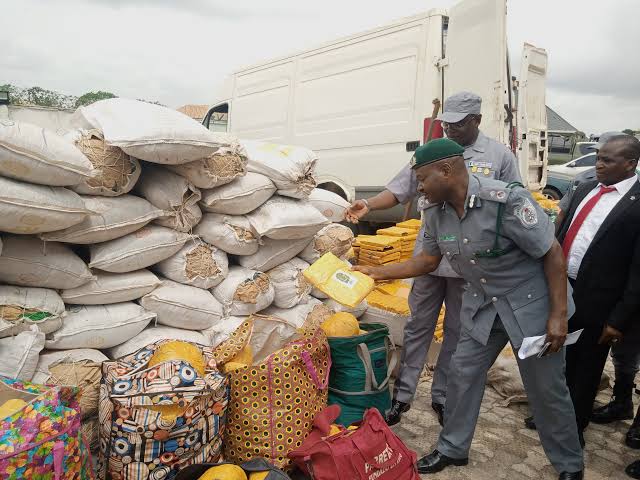 The Ogun 1 Area Command of the Nigeria Customs Service (NCS) has said that between July and September of 2022, the Command seized 11,358 bags of smuggled foreign parboiled rice of 50kg each, which is equivalent to 38 Trailer loads, along the Idiroko border area.

Speaking on Friday at the Idiroko border base of the Command, Customs Area Controller of the Command, Bamidele Makinde explained that the Command also recorded seizures of 1550 pieces of used tyres and 180 bales of used clothing in a warehouse situated along Lagos-Ibadan Expressway, Ogun State within the period under review.

According to Comptroller Makinde, ” The Command generated the sum of N38,537,267 only as revenue for the three quarter of 2022. This revenue is from import duties and auction Sales of Petroleum products.

“On seizures and anti-smuggling activities of the Command during the period under review, the Command recorded a seizure of 11,358 bags of smuggled foreign parboiled rice of 50kg each, which is about 38 Trailer loads.

“In addition to the above, the Command recorded seizures of 1550 pieces of used tyres and 180 bales of used clothing in a warehouse situated along Lagos-Ibadan expressway.

“We were able to achieve this feat with the effective use of intelligence. Therefore, recalcitrant smugglers should note that the command, through shrewd, intensive and choking anti-smuggling activities, driven by effective employment of timeous intelligence, is all out for them.

“Let me use this opportunity to commend the section of the business community which has been complying with the Federal Government fiscal policies. We assure them of our continued support by way of trade facilitation. As for diehard and would-be smugglers, we warn them to steer clear of smuggling activities as the full weight of the law will be brought to bear on any arrested perpetrator of such acts.

“I appeal to parents and guardians to help us in this regard by prevailing on their wards to desis® from smuggling activities and confrontation with, or attack on, security agencies. It is important to note that activities embarked upon by the Command are driven by patriotism for the economic development and security of the nation. Nigeria Customs Service operatives, mindful of the rules of engagement, will continue to carry out their legitimate duties as prescribed by law.

“It is also worthy of note that these achievements we continually record wouldn’t have been possible without the continued support of the Comptroller-General of Customs (CGC) and his management team, as well as the diligence and gallantry of our officers and men at their various duty posts.”