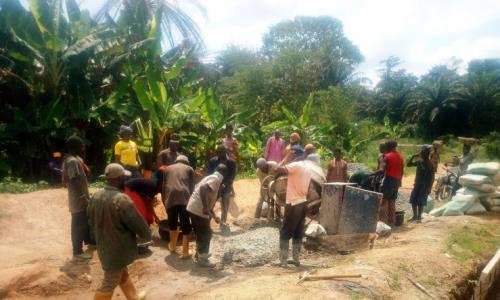 A young man, simply identified as Ojemba, has reportedly hacked his brother, named Obok, to death.

The incident occurred in a village of Liokom in Wanihem community in Yala Local Government Area of Cross River State.

An eyewitness, who gave his name as Sunday Uloko, and resides in the village, said the two brothers had no prior misunderstanding until the incident occurred.

“Ojemba is the younger one while Obok is elder. Obok came back from a burial wake-keep yesterday morning and his wife gave him some food to eat before going to the farm to stake his yams.

“While eating Ojemba took the machete which Obok had sharpened to cut yam stakes and from behind dealt three cuts on his brother and removed his head”.

He said the wife of the man killed raised alarm and the villagers gathered and tried to arrest the assailant, who bolted to his room, threatening that anyone who came close would also receive the same treatment he meted out to his brother.

“He went inside his room daring anyone to come close but three young men with Odeshi (local charm to protect the body from dangerous weapon) went into his room and dragged him out”.

The eyewitness said after the villagers gathered and had some deliberations they came to the conclusion that it was an abomination and he too should die with his brother.

“They tied his arms and legs and dumped him inside the grave they dug for his brother and placed his brother’s body on his and covered the grave with earth.

“He was begging and shouting that they should have mercy on him but nobody listened and behold their mother died some weeks back.”

“I am the State Security Adviser to Governor Ben Ayade in the North Senatorial District, No no no, nothing of such happened there,” he stated