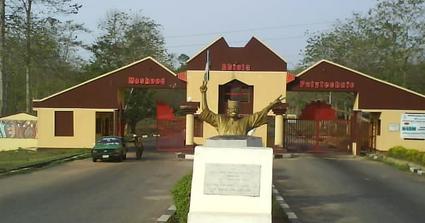 The proposed Moshood Abiola University of Science and Technology (Amendment) bill, 2019, sent to the Ogun State House of Assembly by Governor Dapo Abiodun is meant to address issues surrounding the eventual take off of the new institution without sacrificing the academic programme  of the Moshood Abiola Polytechnic.

The Assembly Speaker, Olakunle Oluomo, who stated this while receiving the Executive members of Abeokuta Club led by Engr. Tokunbo Odebunmi  on a courtesy call at the assembly Complex, Oke- Mosan, Abeokuta.

He explained that the present administration sought the amendment of the existing MAUSTECH law, 2017 through the State Assembly with a view to ensuring that the students running different programmes in the old MAPOLY were allowed to conclude their academic programmes.

The Speaker, in company of seven other honourable members, noted that as at now, there is no accreditation of courses yet for the new university by the National Universities Commission, (NUC) no activities of any sort, saying that there was nothing like relocation of the new university from Egbaland as being speculated, rather the two institutions would be accorded opportunity to co-exist to ensure smooth take off.

Earlier in his presentation, the President of Abeokuta Club, Engr. Odebunmi said what happened recently on the issue of MAUTECH was as a result of communication gap, as the club is non-partisan, consisting of  responsible citizens with the Governor Dapo Abiodun as its Patron.

Odebunmi said the Club was always in support of government policies and programmes and had no cause to go against the government, rather it paid the visit to the assembly to inform Government on the need to retain the two institutions in Abeokuta.

According to him, statistics showed that less than 25% of applicants of the State origin secured admission into higher institutions nationwide annually, hence, the need to support the establishments of more tertiary institutions in the State.

Most Reverend Olumakaiye: We’ve Lost A Committed Man Of God –...