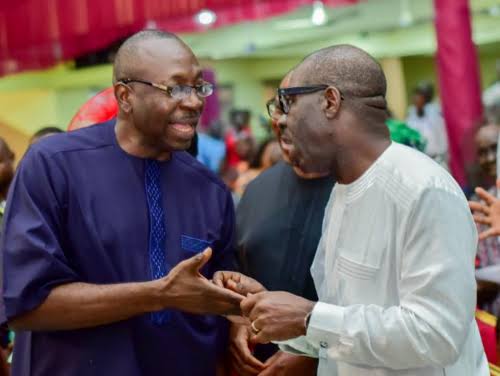 Imasuagbon, who stepped down for Obaseki shortly before the primary, remarked that the bloc votes from Edo Central and South senatorial districts would seal victory for the incumbent.

In an interview with The Guardian yesterday, Imasuagbon, who is widely known as Riceman, regretted that “despite the fact that APC leaders are aware that the odds do not favour Pastor Osagie Ize-Iyamu, they have continued to deceive him.”

He said: “Mark my words, Ize-Iyamu is my friend, but the forthcoming governorship election in Edo State is beyond him. Governor Godwin Obaseki is destined to win, and he will win.”

In the meantime, a senior management staff of the National Youth Service Corps (NYSC) has confirmed issuance of a new discharge certificate to the Edo helmsman.

The official, who craved anonymity, clarified that the governor, who was mobilised in Jos, Plateau State in 1980, had his last name wrongly typed as ‘Obasek’ instead of ‘Obaseki’ in the document in question, hence the decision to issue him a fresh one carrying his true identity.

Also yesterday, the chairman of Edo chapter of the Action Alliance (AA), Mr. Stephen Ayamekho Eguavoen, and other executive members of the opposition party resigned, citing alleged highhandedness and meddlesomeness of the national leadership.

Eguavoen said they quit because the “party national chairman, Adekunle Abdulraaheed Om-Aje, did not recognise the state party executives in the conduct of the party’s primary.

However, a socio-cultural organisation, Benin National Congress (BNC), has cautioned youths against being used to settle political scores.

Addressing a press conference yesterday in Benin City, the group’s president, Aiyamenkhue Edokpolo, alleged of plot to mobilise thousands of Benin youths to the palace of Oba Ewuare II and homes of prominent sons and daughters to allegedly embarrass a great son of the town ahead of the governorship election.

Two Senators defect to Labour and NNPP at plenary

Technical and Vocational Education Bill, 5 Others Scale Second Reading In...