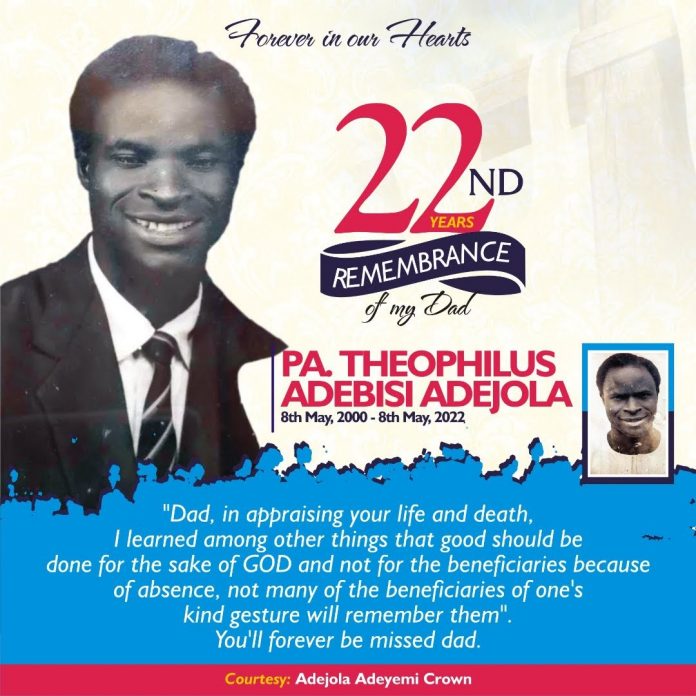 It’s been Twenty – Two years since the departure of Pa. Theophilus Adebisi Adejola who died on 8th May, 2000.

Here’s what a lover of Baba’s life and time has to say about him 22 Years After.

I remember the roles ‘that man’ played in our community while alive. Some called him Daddy, some Mr. Adejola, some, Tisa, My Father used to call him Debisi, “laa pe Debisi a ke la bami ka risooti re”. He was always available to interprete all my results from Modern School to WAEC, in that wise, there was no way I could tell lies, like some students did that time.

Though, lying wasn’t part of me as far as school results were concerned.

Some called him, “inlo nuu”, meaning in Ijesa, “omilo reni”, this was his communication style because that time he had just arrived from Iwo, an Oyo speaking community. That Oyo dialect was traceable in his communications.

The highest of his Nick name was OYO, Baba was OYO not because he worked with Radio OYO or that he was in OYO STATE but because he was one and only source like the then RADIO OYO, where hidden truths could be extrcated. Baba OYO was not part of those who machinated deceit, harboured Indolence and condoned aberration. Added to this was the dexterity being displayed while he read the church weekly news/information of previous week, Baba Adejola would recount such events (as the “Iriju agba” Ijo methodist, which people refer to this day as Senior Church Steward) devoid of clandestine manipulations which nowadays engulfed our societies.

The greatest reason for the nickname, OYO, also could be attributed to Baba’s interest in students successes resulting from their academic pursuit. He made sure that no students came home to deceive his/her parent after each examination. This wasn’t very palatable to many students who had clandestine motives about results, this also amplified the nickname OYO.

Baba would take his time to call on Principals of all Secondary Schools around Ijesa land being attended by Iloko youths and in his honour and self recognition would be given access to information relating to his requests.

Many of us benefitted from his styles as we doubled efforts so that our deficiencies would not be revealed either in the church, during ‘ifilo’ or at the sitting room of your father.

The man died and today we suffer from lack of genuine and traceable academic information, thereby, our youths now deceive both the community and their parents, such situation that now created more drop-outs than real graduates and both gallivant the streets with ‘elegantial precision’. Baba, also popularly known as Baba Debo, lived a fulfilled life, I’m writing this not because he was a father but he was the only person that could tell Moyinlorun, without further enquiry, that Ige passed his examinations, if anyone else did, Moyinlorun would still verify anytime Debisi was available.

Baba passed on since year 2000 but today people still remember him for the roles he played that no one is either qualified or pragmatic enough to assume. I congratulate the children for having such a brave soul as father.

Rest on Baba. You have done what even Napoleon could not do.

Yemi, you are blessed.

Buhari will be exposed soon, president not in charge – Primate...