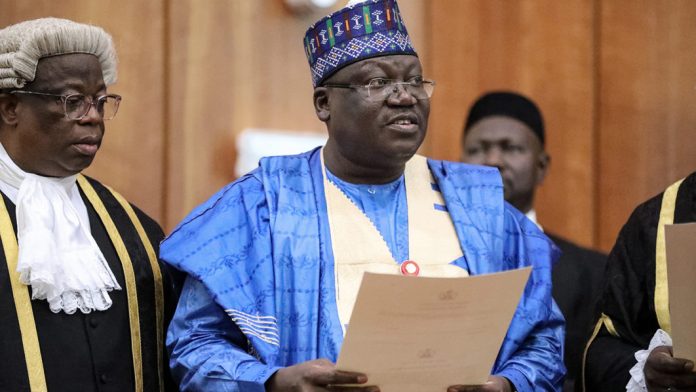 The newly-elected President of the Senate, Ahmed Lawan, has said that the 8th Assembly under the leadership of Senator Bukola Saraki performed below expectations.

Lawan, who spoke yesterday while fielding questions from State House Correspondents after the Jumat prayers at the Presidential Villa, Abuja, however assured that under his leadership, Nigerians will see a National Assembly that is focused, united, patriotic and nationalistic.
He assured that under his leadership, the parliament would work hard to catch up with the lost grounds wasted under the Senator Saraki-led leadership over the last four years, adding: “I am sure we did not perform to our capacity as a National Assembly in the last National Assembly.

“This time around we want to perform to full capacity and by the grace of God Nigerians will see a positive difference in terms of delivery of service to our country men and women.“From my interactions with my colleagues when I was contesting, every senator there when I was contesting, has one massive experience or another. I saw my colleagues exhibited patriotism and desire to work for Nigerians and therefore we hope to have a National Assembly that will work for Nigerians optimally and patriotically.

“We are in a hurry, we are thirsty to perform, we want to support Mr. President, we want to see Mr. President achieve those legacies and dreams that he has and we are going to work full-course and full-time to ensure that we give him the maximum support that he requires.”Lawan also assured that the 9th National Assembly will work with the executive arm of government in partnership and synergy to ensure that they perform their functions as a government because “we are a single unit.”

The President of the Senate said the National Assembly would insist that whoever has a responsibility in government performs that responsibility because “it takes all of us to work together to ensure that no part or nobody is left behind. If there is anyone that is deficient it would cost the system,” he added.On prompt passage of budget, he noted: “This is a crucial thing that worries everyone, every Nigerian wants to see the National Assembly pass the budget in good time and what we have in mind we’ve campaigned with that and it is something both of us in the National Assembly have bought into – that we’ll pass the budget within three months by the grace of God.

“Before we leave for Christmas break, the budget would have been passed and Mr. President would have had the budget before him to sign and assent. “This requires sacrifice in the National Assembly and the Executive side of the government that we create a window for budget defence only, a dedicated period and timeframe- say a month of which only budget defence would be carried out in the National Assembly.

“After that for example, every minister or head of agency who did not come to defend the budget of that institution, the National Assembly would go ahead to work on such a budget appropriately.”He said that nobody would take pleasure in wasting the time of “this administration.”