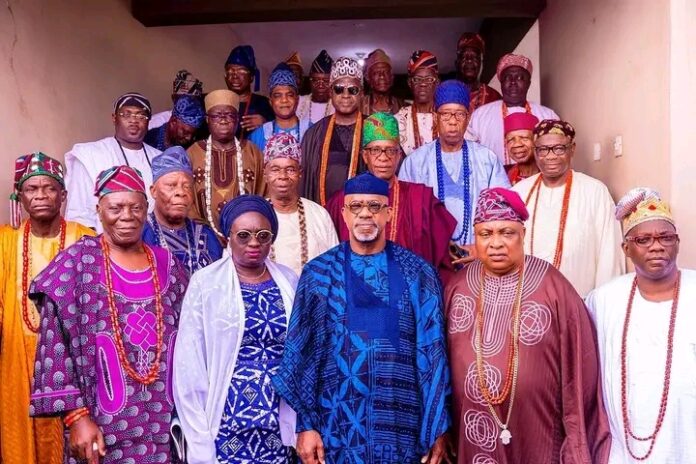 Traditional rulers in the Remo Division of Ogun State have endorsed Governor Dapo Abiodun for a second term in office.

The monarchs who announced their endorsement at the Akarigbo Palace in Sagamu, said the decision to support Governor Abiodun for another term of four years was not only for the benefit of Remoland alone, but for the entire state, declaring that his first term has brought development to all sections of Ogun.

Speaking the Akarigbo and Paramount Ruler of Remoland, Oba Babatunde Ajayi, while hosting the traditional rulers, said the Ogun has witnessed positive monumental leap in less than four years in the area of infrastructure and human development.

He noted that, ‘when we look at the history of Ogun State, this man is the best thing that we have in this state. Talk of fairness, justice and equity, he has spread developmental projects to all parts of this state. We will bank and invest in him for another term because we have seen the dividends”.

Oba Ajayi, however, enjoined the governor to be interested on who will succeed him in 2027 as succession is very important for the overall development of the state.

In his remarks, the Onirolu of Iloru, Oba Sikirulai Adeyiga, applauded the governor for doing a good job in his first term, expressing the hope that if given the opportunity to serve for another term he will do better, assuring the governor that traditional rulers and the people of Remoland are solidly behind his second term bid.

Responding on behalf of the governor, his deputy, Mrs Noimot Salako-Oyedele, thanked the traditional rulers for the confidence reposed in the governor by unanimously endorsing him for another term.

About The Man Theophilus Adebisi Adejola 22 Years After