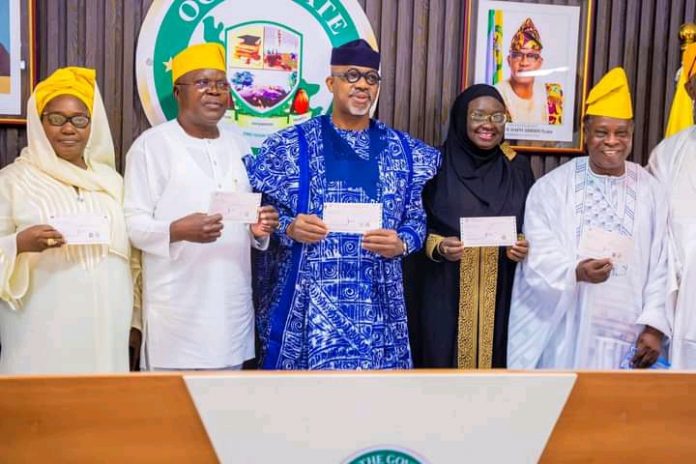 Political leaders and business men from Ogun West Senatorial District of Ogun State, have donated the sum of N50m to the State governor, Dapo Abiodun to assist in his campaign expenses for the second term in office.

The governor had on Thursday declared his intention to run for a second term while hosting the DA Mandate Group from Remoland, which presented him a cheque of N50m to purchase his nomination form.

But presenting the cheque on behalf of the Ogun West group to Abiodun, on Friday, at his Oke Mosan Governor’s Office, Otunba Akeem Adigun said the gesture was born out of love the people of the district have for the governor, particularly the brilliant way he is executing projects across the state.

“We had planned to buy you the nomination form as part of our contribution to your re-election process, but our brothers from Remo beat us to it. Nevertheless, we are presenting this N50m cheque to help you take care of your campaign expenses”, Adigun stated.

Also Speaking, a former deputy governor in the state, Alhaja Salimot Badru, lauded the governor for treating all sections of the state equally in the area of project execution, adding that the district was also happy that the governor has again chosen his deputy who is one of them as his running mate.

On his part, a leader from Ogun West, Alhaji Muftau Ajibola, said the gesture was to show appreciation to the governor for executing life-changing projects in the district, urging the governor to continue to treat all parts of the state equally and declared that Ogun West would always support him.

Responding, Governor Abiodun who recounted the huddles his team had to go through in the course of his campaign to get the people of the district buy into his vision, thanked the elders for believing and trusting in him despite all odds.

“I am very grateful for the rock solid support you have given me during and after the election. This has allowed me to remain focussed and committed in running the affairs of this state. Your patience and trust over the past three years is overwhelming.

“Initially, there was suspicion where other senatorial districts thought I was only going to develop some sections of the state to the detriment of others, but, I thank God, all parts are well taken care of and represented in all that we do.

Even in the civil service, we ensure that all parts are represented in the top hierarchy. I will continue to be fair, just and equitable to all”, Abiodun reiterated.

The governor recalled that the first road project and renovation of health facilities started in the district, saying major road construction was ongoing in different parts of Ogun West

“As we speak, the asphalting of the Atan-Agbara road has commenced. This road is so important to us, to the big industries and companies that operate in that axis. If we fail to construct that road, many big businesses will leave and that will not be good for us. By the grace of God, it will be commissioned around September this year”, the governor said.

Other roads receiving attention according to Governor Abiodun include Owode-ILaro, Ota- Idi- Iroko, as well as Sagamu- Papalanto-Ilaro roads.

While pledging that his government would continue to give the senatorial district the desired attention, he informed the group that efforts were on to extend the rail line from Okokomaiko in Lagos State to Agbara, assuring the people that they would always be consulted before a project is executed in their area.

Abiola Ogundeko Felicitate With Gov Abiodun At 60, Eulogises His Developmental...