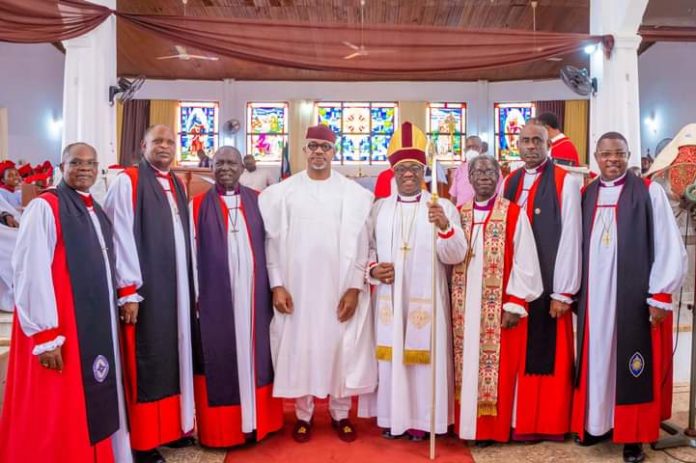 Ogun State governor, Dapo Abiodun has enjoined Nigerians to obtain their Voters’ card in order to exercise their civic rights in the forthcoming general elections.

The governor who spoke at the Thanksgiving Service for the Third Session of the Fourth Synod and Investiture of Diocesan Distinguished Fellows and Royal Fellows held at the St. Barnabas Anglican Church, Okun-Owa Ijebu, in Odogbolu Local Government Area, governor, noted that it had become imperative for eligible Nigerians to get their Voter’s cards so as not to be disenfranchised.

“The Bible says when the righteous rule, the people rejoice. Let us get our Voter’s cards so that we can exercise our civic rights and vote credible people into government. Let us stop complaining about the situation of things in the country. The people get the government they desire”, he said.

Abiodun who noted the challenges facing the nation, decried the prevalent social vices in the country, noting with dismay the situation where children in primary schools are now involved in cultism.

“Nigeria, no doubt, is facing a lot of challenges. Cultism has become the order of the day. Kidnapping has become the fastest way of making money. Our youth no longer want to work but I believe that with faith and hope in Christ, we will overcome our challenges”, the governor stated.

He urged parents to pay attention to their children’s welfare and well-being, saying, “as parents, we need to do our beats by guiding them into the right way. Let us ask questions when necessary and ensure that our children, who are our future, are led rightly”.

While calling on the people to join hands with the government in building the nation, Abiodun urged the people to have hope and faith in God as these challenges are not insurmountable.

Speaking on the theme of the Synod titled, ‘Lift up your Eyes’, the Bishop of Irele/Ese-Odo Diocese, Ondo State, Rt. Rev. Joshua Oyinlola, urged Nigerians not to sell their votes, but vote according to their conscience, declaring selling their votes amount to mortgaging their children’s future.

The clergyman said it was time for the leaders to pay attention to the hardship being experienced by the citizens, charging christians not to be blindfolded by the country’s challenges and lose sight of God’s glory.

The Diocesan Bishop, Ijebu South-west, Rt. Rev. Babatunde Ogunbanwo, in his remarks, lauded the state government for empowering the youths, saying “we do not need youth who are thugs, but useful youth who will be useful to themselves and the society”.