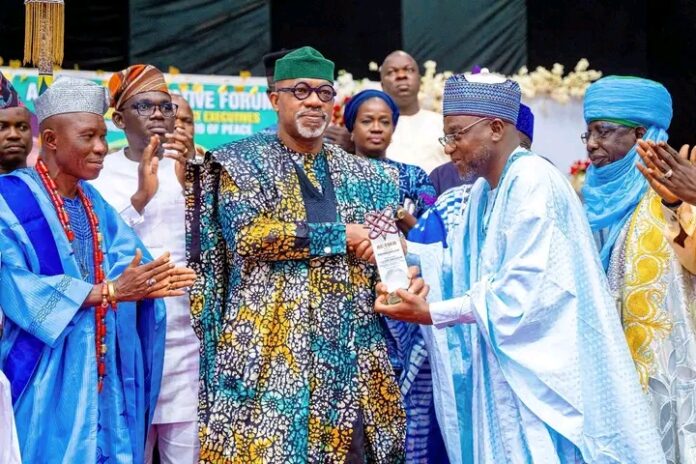 Ahead of the conduct of the 2023 general election, Governor Dapo Abiodun of Ogun State has called on Nigerians to eschew politics of rancour and acrimony, but give serious consideration to the future of the country.

Abiodun made this call at the inauguration of the South West Executive of Arewa Consultative Forum and conferment of the Award of Peace Ambassador on him by the Forum, held at the June 12 Cultural Centre, Kuto, Abeokuta, on Saturday.

He noted that it was time to engage in activities that would unite rather than divide the country.

He said: “Let me use this opportunity to inform our people that politics and politicking towards next year’s general elections have already begun, and we must all shun the politics of rancour and acrimony. We should rather consider the greater good of our nation as paramount in our thoughts and deeds.

“We must not allow politics to truncate what we have enjoyed in Ogun State. This administration has done everything within its capacity to lower the political temperature, to ensure that all issues relating to crime, criminalities and thuggery are lowered so that our people can be free to go about their businesses.

“I want to thank the Miyetti Allah chairman who in his remarks stated that in Ogun State, everyone is free to go about their legitimate businesses at any time of the day. I therefore urged all our people to continue in their support and cooperation and also in prayers, together, we will build a state that is enviable by others”, he said.

He explained that as a multi-cultural and multi-religious society, tolerance and understanding remain the prime attributes needed for the overall economic development and well-being of the people.

He emphasised that the state has a standing reputation as a place where different tribes, religions and ethnicity have been managed with good success, adding that Ogun state is proud to identify with all endeavours that help in promoting peaceful and conducive environments for investments and creation of individual prosperity.

“As I recognize this event as another contribution of the Arewa Community towards the promotion of peaceful co-existence in Nigeria, I am also very delighted to be honoured by the loving people at this gathering. I want to commend all our brothers and sisters from the Arewa community across the southwest of Nigeria for today’s inauguration of the southwest executive council and the presentation of today’s Award.

“As a government and people, we are particularly pleased to share the joy of today. Permit me to note that the Arewa Consultative Forum has continued to considerably influence the political scene in Nigeria. This Association had contributed to be at the vanguard of the One-Nigeria campaign which is a more united and stronger Nigeria. It also means a country where all the people can enjoy increased prosperity”, Abiodun stated.

The governor, while appreciating the Forum for the honour done him, said the award would further propel his administration to take more proactive measures that would secure the people in the state irrespective of where they come from.

In his address earlier, the National Chairman of Arewa Consultative Forum, Chief Audu Ogbe, represented by the Administrative Secretary, Alhaji Munir Mohammed, appreciated the state government for making Ogun onducive for all to carry out their daily business activities without molestation..

He noted that the state is one of the few that accommodate people from diverse culture, religious and political affiliations, stating that his people have enjoyed the hands of friendship extended to them by the indigenes of the state.

Ogbe, however, called for a halt in the profiling of the Fulani people in the southwest, calling for diligent prosecution of those found wanting in the law courts to serve as a deterrent to others.