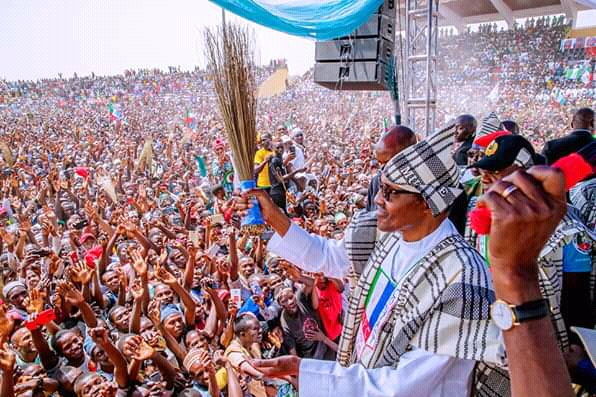 No fewer than five persons died on Thursday during a stampede at the Jolly Nyame Stadium in Jalingo, the Taraba State capital during the presidential rally of the All Progressives Congress.

An eyewitness, Tanko Yusuf, told one of our correspondents that the stampede happened as President Muhammadu Buhari was entering the stadium and the party’s supporters, who were locked outside, were trying to catch a glimpse of the President.

He stated, “I was standing at the popular stand of the stadium when suddenly I saw some people going down and being trampled upon by a mammoth crowd who forced their way into the stadium as the President’s convoy was making its way into the arena.

“Five corpses believed to be supporters of the All Progressives Congress were brought to the hospital and deposited at the morgue,” she said.

Buhari at the rally in Jalingo promised to complete the Mambilla hydropower project, if re-elected.

“The Mambilla Power Project will bring development to your state and the country as it will generate enough electricity for you to do businesses and improve your living standard. I will complete it if you re-elect me for another term,” he said.

Buhari said he would tackle poverty and make sure Taraba farmers had access to fertiliser at a subsidised rate.

National Chairman of the APC, Mr Adams Oshiomhole, described Buhari as the only honest man among the presidential candidates and urged the people of Taraba to vote for him.

The APC governorship candidate in the state, Sani Danladi, called on Taraba people to vote for Buhari on February 16.

The President, according to a statement by his media aide, Garba Shehu, expressed sadness over the death of the APC supporters.

Buhari was quoted as saying, “I always feel very sad and distressed when ordinary Nigerians who love me and our party because of what we stand for and have done, make personal sacrifices by taking the pains to show their support, end their lives tragically.”

President Buhari called for restraint on the part of his supporters to avoid such incidents at the campaign venues.

“I want them to stay alive and witness the dividends of purposeful governance that the APC administration will unfold when they renew our mandate,” he said.

Following the deaths, the All Progressives Congress, through its National Publicity Secretary, Mallam Lanre Issa-onilu, said it was deeply pained by the loss.

The statement read, “Our great party is deeply pained by this painful loss. We pray for the dearly departed and express our deep condolences to their family members, loved ones and the good people of Taraba State.

“We also pray for the speedy and full recovery of our dear supporters who suffered injuries in the sad incident caused by overcrowding.”

The party promised to ensure improved crowd control to avoid a recurrence.

Responding to the tragedy, the presidential candidate of the Peoples Democratic Party, Atiku Abubakar, in a statement by his media aide, Paul